Andrew Coscoran has qualified for Thursday's 1500m final at the European Athletics Championships in Munich after finishing seventh in his heat.

With just two heats of the event to qualify for the medal race, there was little room for error, with the first four home from each heat progressing and the four fastest non-automatic qualifiers.

Coscoran, who had to overcome being boxed in, clocked three minutes 38.74 seconds as Poland's Michał Rozmys won the faster of the two races in 3:37.36.

It wasn't always pretty but Andrew Coscoran dug deep when it mattered most in his 1500m semi-final at the European Championships, booking his place in the final. #RTEsport pic.twitter.com/KSNmts13od

Speaking afterwards, the Balbriggan athlete told RTÉ Sport: "I'm happy, I'm ready to go, and I'm ready to be competitive in the final."

The composure Coscoran displayed despite his difficult passage was arguably the most impressive aspect of his performance, with the 26-year-old adding: "I was boxed in at the back, but I was relaxed – I didn't really panic – I just kind of expected to be able to come through.

"I saw that we came through in 2:41, so I knew that if it was a fast last lap we'd all get through as the four fastest losers."

Andrew Coscoran is looking forward to Thursday's 1500m final at the European Athletics Championships in Munich after finishing seventh in his heat. pic.twitter.com/cmvxu2y9WS

Compatriot Luke McCann was well positioned approaching the bell in his heat, but his effort petered out in the closing stages as he finished 10th in 3:40.98 as Jakob Ingebrigtsen of Norway claimed a tactical race in 3:38.48.

Israel Olatunde ran a scorching personal best of 10.19 to win his 100m heat in the morning session.

This is the 20-year-old's first senior outdoor championships and he started with a bang. It was a highly impressive run, as Olatunde – running in lane 8 – finished just 0.01 off Paul Hession's 100m Irish record.

Olatunde will run in the third of Tuesday's three 100m semi-finals, due off at 7.19pm Irish time, with Italy's Olympic champion Lamont Marcell Jacobs set to line up in the same race.

The first two in each semi-final and the two fastest non-automatic qualifiers will make the final.

The final is scheduled to take place at 9.15pm Irish time.

Israel Olatunde ran a scorching personal best of 10.19 seconds to win his men's 100m heat at the European Athletics Championships in Munich.

Reflecting on his breathtaking run, the Dún Dealgan and UCD sprinter said: "I just wanted to come out here and compete to the best of my ability.

"I'm happy I did that in the first round and I'm looking forward to the semi-finals tomorrow."

Turkey's Emre Zafer Barnes delayed proceedings at the blocks before Spain's Sergio Lopez was disqualified for a false start, but Olatunde belied his years and maintained his focus.

"I guess from experience you know to put that out of your mind and focus on the task in hand, and I was able to do that," he added.

"I'm definitely in the best shape that I've ever been in. It's a personal best so I have to focus on the semi-final now and producing something even better than that."

Chris O'Donnell's and Rhasidat Adeleke's exploits this year mean that they didn't have to contest the heats of the men's and women's 400m, with the rising stars progressing directly to the semi-finals.

Phil Healy won't be joining Adeleke in the next round after disappointing in her heat.

The Cork woman faded to finish sixth in 53.10 as Britain's Laviai Nielsen cruised to victory in a season's best 51.60.

Sharlene Mawdsley also recorded a sixth-place finish in her heat, with the Tipperary athlete stopping the clock in 52.63 as Portugal's Catia Azevedo won the race in 51.63. 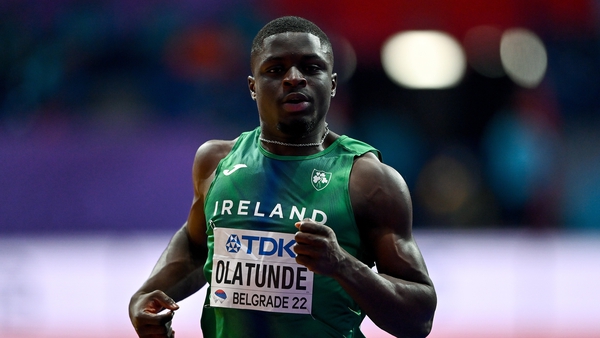