Andrew Coscoran will be in men's 1500m semi-final action at the World Athletics Championships after a third place finish in his heat in Eugene, Oregon.

With the top six in each heat advancing directly to the next stage, he qualified with plenty to spare after finishing behind just Australia's Oliver Hoare and Ethiopia's Samuel Tefera in the first of the three heats.

The Balbriggan native will return to the track for the first semi-final heat at 3am Irish time on Monday.

The 29-year-old clocked a season's best 49.15 to finish second in heat 4 behind Estonian Rasmus Magi.

The Waterford native will also return to action in the early hours of Monday morning, with his semi-final heat scheduled for 2.03am Irish time.

Elsewhere at the World Championships, Fred Kerley led an American clean sweep in the 100 metres final, the first since 1991.

Kerley timed his dip perfectly to clock 9.86 seconds as Marvin Bracy took silver and Trayvon Bromell bronze, both with 9.88 seconds, but Bracy edging it by two thousandths of a second.

Carl Lewis led clean sweeps in 1983 and 1991 but no nation has managed it since. 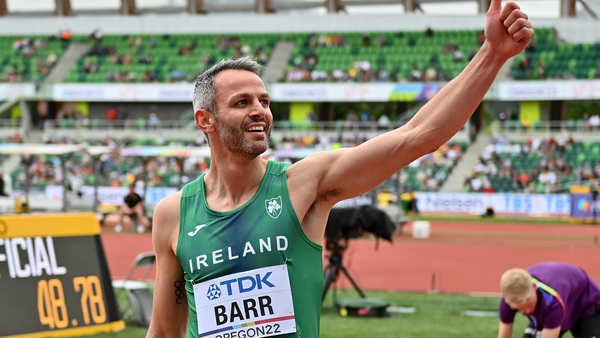