Ethiopia's Sisay Lemma won the men's London Marathon after breaking away from the leading pack late in the race, while Kenya's Joyciline Jepkosgei prevailed in the women's event.

Lemma came home in a time of 2:04.01, crossing the line 27 seconds ahead of Kenya's Vincent Kipchuma with Mosinet Geremew third. The 30-year-old is the sixth quickest runner ever at the London Marathon 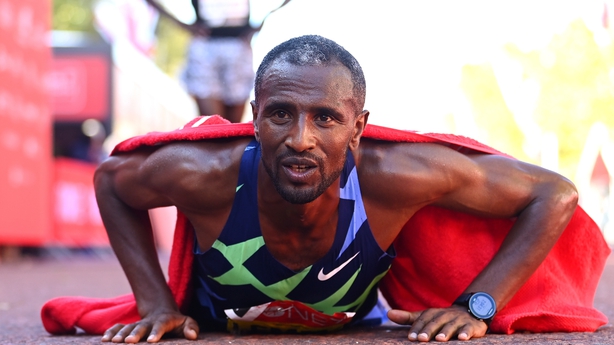 Jepkosgei clocked 2:17.43 as world record holder and defending champion Brigid Kosgei faded late in the race to finish just outside the podium places.

The men's wheelchair race was won by Marcel Hug, who claimed his third victory in London.

The Swiss, nicknamed 'the Silver Bullet', put in a dominant performance to win in a course-record time of one hour, 26 minutes and 25 seconds.

Daniel Romanchuk of America was second while Weir came out on top in a tight race for third with Brent Lakatos.

Junior doctor Phil Sesemann swapped his scrubs for spikes and finished in a remarkable seventh place at the London Marathon.

Sesemann, who worked at Leeds General Infirmary throughout the coronavirus pandemic, celebrated his 29th birthday by competing in his first ever marathon.

Incredibly, he ran a time of two hours, 12 minutes and 58 seconds which secures qualification for the European Championships and Commonwealth Games