Sprinting sensation Rhasidat Adeleke believes that the Paris 2024 Olympics could prove to be a monumental event for Irish track athletes after another bout of brilliant results over the weekend.

The 18-year-old picked up her second gold medal (200m) at the European Athletics U20 Championships in Tallinn on Saturday, with Nicholas Griggs (3000m) and Cian McPhillips (1500m) also triumphing in their respective events.

Adeleke's omission from the Irish team for the relay race at the forthcoming Tokyo Games was a controversial choice earlier this month, but her recent performances have brought real excitement about the future for Irish athletes.

"We’ve been coming up in the sprints, as I said before," she commented after her comfortable win in the 200m event in Estonia.

"There’s going to be a lot of sprinters to watch out for in the next coming years. Paris 2024, you know we’re on the rise so just watch out!"

Having already claimed the 100m gold medal at the European Championships, Adeleke looked incredibly composed as she blew the competition away with a new Irish record of 22.90 in the 200m final.

"I just feel like that’s really important to me. To actually be able to achieve it and complete it is such a huge relief and such a weight lifted off my shoulders.

"To be able to do such a thing is great, it’s really hard to do, six rounds and pretty much all at full speed."

Next on the agenda for Adeleke is a well-earned rest before the new indoor season commences.

"I don’t really know what is next," she added.

"I’m going to have my off-season now, my season’s over, so I’m just going to relax, get back to training in Austin then hopefully the indoor season is next." 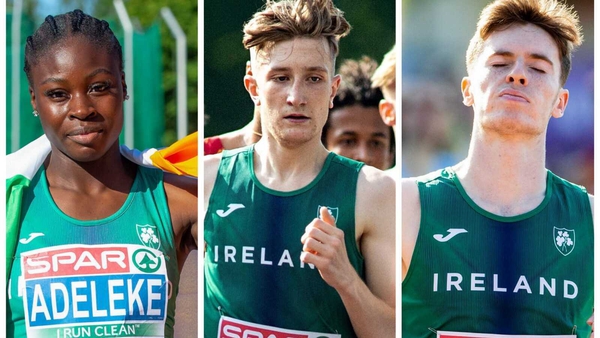