Two Irish athletes - Phil Healy and Marcus Lawler -  who are currently in position to qualify for the Tokyo Olympics were hard pressed to win their national titles on the final day of the Irish Life Health National Championships at Morton Stadium, Santry.

In what was a real indicator of the depth that's ongoing and developing in Irish sprints, Healy and Lawler both needed a well-timed dip at the line to claim their 200 metre gold medals on an afternoon which brought the curtain down on a marathon nine sessions of athletics over two weekends.

These championships were shorn of many stars of the sport in Ireland but they defied the lack of atmosphere and the tedium of an elongated programme to produce high quality championship racing emphasised by the narrow victories of Lawler and Healy.

Former national hurdles champion Sarah Lavin really put it up to Healy in the women’s 200 metres final and with 40 metres to go less than a stride separated them before Healy’s dogged resilience and lunge at the tape took her to victory in 23.57 seconds with Lavin clocking 23.74 .

Lawler’s start in the men’s 200 metres final was good but he still trailed 100 metre gold medallist Stephen Gaffney coming off the bend. However, the UCD athlete pulled up clutching his hamstring leaving the St Lawrence O’Toole’s man in the lead but he then had to cope with fast finishing national indoor champion Mark Smyth before claiming victory by just .06 of a second in 20.95.

Another athlete who is likely to be destined for the Tokyo Olympics, steeplechaser Michelle Finn from Leevale, lapped the field to win her specialist 3,000m event in 9 minutes 59.72 seconds from Aoibhinn McGoldrick (Raheny Shamrock), who also bagged U-23 gold, in 11:25.51 and Emily Grennan (Tullamore Harriers) in third 11:35.30.

Rory Chesser won the men’s 3000 steeplechase while the sprint hurdles titles were claimed by Ger O’Donnell and Sarah Quinn. The men’s and women’s 800 metre titles went to Harry Purcell and Iseult O’Donnell. 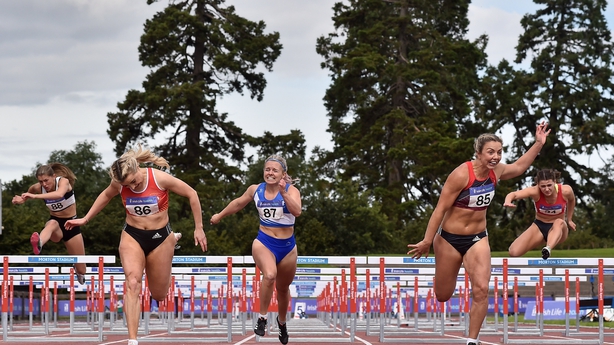 Micheala Walsh (Swinford) had been quiet these championships having not competed in any throwing events to date but she won a competitive senior women’s shot put competition with 14.19m and U-23 gold along with it.

Ciara Sheehy (Emerald) took silver with 13.85m and Casey Mulvey (Inny Vale) the bronze with 13.66m. Kate O’Connor (St Gerard’s Dundalk) was just outside the medals with a best of 13.58.

There were plenty of personal bests in the women’s pole vault, which was won by 17-year-old Orla Coffey (Carraig na Bfhear) with a best of 3.50m.

Una Brice (Leevale) was second with a personal best of 3.50m. Ciara Hickey (Blarney/Inniscara) was third with 3.40m.

Finn Valley brothers John, and James Kelly, took an excellent one-two in the senior men’s shot put which also brought respective gold medals in the senior and U-23 category.

John Kelly had an excellent series and won the senior title with a best of 18.40m. James Kelly took silver and U-23 gold with 16.48m while Sean Breathnach (Galway City Harriers) had to settle for bronze with 16.39m.

Breathnach, the affable Galway man, didn’t have to wait too long for another gold medal and 18th national title when he won the men’s 56lbs weight for distance with a best of 8.24m. Michael Healy (Youghal) was second with 7.55m and John Dwyer (Templemore) third with 7.19m. 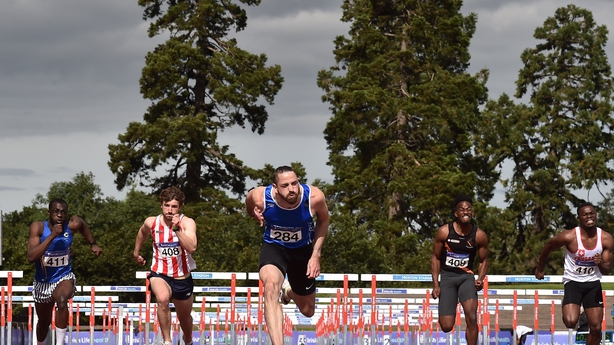 Yuri Kanash (West Waterford) was delighted with his senior pole vault title with a best clearance of 4.50m from Shane Power (St Joseph’s), who won the U-23 title, with 4.40m and Michael Bowler (Enniscorthy) with 4.40m.

Harry Purcell’s (Trim) winning roar summed up an emotional and significant 148th consecutive national championship in the 800m in 1:52.49.

It was a brilliant tactical run from the Trim athlete, with rising stars Cian McPhillips (Longford) and Louis O’Loughlin (Donore Harriers) second and third in 1:52.78 and 1:53.83 respectively.