Olympic hopeful Andrew Coscoran views the postponement of the Tokyo Games as the chance to get stronger and be even more competitive with the big guns of the men's 1500 metres come the summer of 2021.

The 23-year-old Balbriggan runner was on course to fulfil his dream of becoming an Olympic athlete when the Games were postponed two months ago because of the Covid-19 pandemic.

Coscoran had been one of the outstanding performers at the Irish National Indoor Championships in March, winning the 1500m in a championship record time of 3:41.36.

That display built on the form shown on the American indoor circuit in early Spring when he competed in the Wanamaker Mile in New York, a race won seven times by the great Eamonn Coghlan.

But then the Olympic Games were postponed and his bid to qualify was put on hold.

"Momentum in running is very important so Tokyo would have been a good opportunity for me to jump straight in at that level but if I am being realistic now, I was not so sure about going there this summer and being near to a place in the final," the Star of the Sea clubman told RTÉ Sport.

"Now though, I have another year of training and building my strength and I’ll probably be even more mature as an athlete and could have the chance of making that final,"

The trajectory Coscoran was on this year had him on course to make the Irish team for Tokyo.

He jumped to number 53 in the world after his 10th place finish in the Wanamaker Mile, where the field included Olympic medalists and finalists.

He also had two very strong 1500m races in Boston. In the first, he pushed former outdoor US National champion Craig Engels right to the line and the following week he was third behind the current US Indoor champion Josh Thompson.

Like so many athletes, Coscoran has been adapting to the restrictions that have been put in place but even though he competes in an individual sport, he misses the company of his training partners.

"The most important thing is people’s health and that is the top priority but I do miss the craic with my training group. The best way for us to train is actually in a group, and we have around 20 in our set-up. I haven’t seen them in over two months.

"I have been training on my own close to home, in line with the guidance, as the tracks are closed. I do miss the motivation that we get from each other." 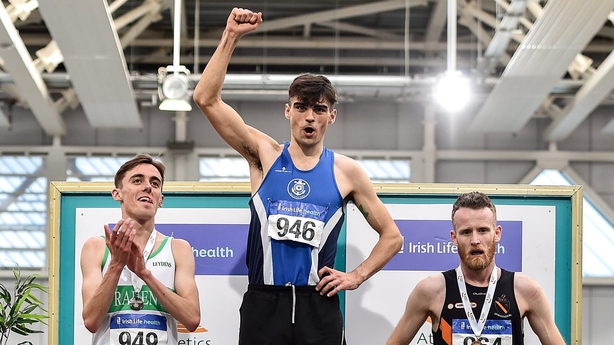 Coscoran’s "second coming" in his chosen sport has gained a lot of media attention. He spent a year at Florida State University on a scholarship when he was just 18 but it didn’t work out as he planned and he came home.

He gave up running completely for a period of time before rediscovering his love for it with the help of Star of the Sea coach Brendan Meade.

However, the experiences he had in America have made Coscoran feel better able to deal with the current situation and what it has thrown at him.

"I am five years older and I suppose being an athlete is not just about your physical performance, there is a mindset around it where you are able to deal with different situations.

"I think your mindset gets stronger the longer you are in this sport. It was difficult when I came back from America but I am stronger on the other side and I can’t wait to get back on the track."

In the meantime, Andrew has been helping Star of the Sea to promote their annual 5 kilometre race, which is taking place in virtual form this year. The competitors run the distance on their own and post their times online.

Every cent raised from the event will go to the Balbriggan Cancer Support Group.

The sporting shutdown has had a massive impact on charities across the country who rely on sponsorship from sports clubs and big races like the Dublin and Cork marathons and the Women’s Mini-Marathon, to maintain their services. They now have to raise funds in other ways.

"Our event is named after our former secretary, Michelle McKiernan, who died from cancer last year and it’s great that the race and the fundraising can go ahead when so many things have been cancelled. It’s a big boost for everyone in our community," says Coscoran.

Offaly rage against Joe Deane and the dying of the light