There have been many 'Golden Girls' over the history of the Olympics but for Australia, sprinter Betty Cuthbert remains the original and the best.

In nine days in late 1956, teenager Cuthbert came from almost nowhere to win three sprint gold medals and become the face of what were remembered as the "Friendly Games", the first to be held in the southern hemisphere.

There were nerves, both from the International Olympic Committee and locally, over whether Melbourne could handle the hosting of the Games but Cuthbert's success helped put those concerns to rest.

Raised a mile from what would later become the site of the 2000 Sydney Games, Cuthbert was so unlikely a champion that she had bought tickets to the Melbourne Olympics on the presumption that she might not even make a strong Australia track team.

"It was as if her entire sprinting career was geared not to a series of peaks but to one explosive climax that lasted through the Melbourne Olympics," Harry Gordon wrote in his definitive history of Australia at the Olympics.

"Its timing was exquisite."

Cuthbert had only pushed herself firmly into contention for a spot at the Games by running a world record time in the 200 metres in Sydney a couple of months before the opening ceremony.

Highly distinctive with her blonde hair, high knee lift and gaping mouth sucking in air, Cuthbert made a flying start to win Australia's first gold medal of the Games in the 100m final. 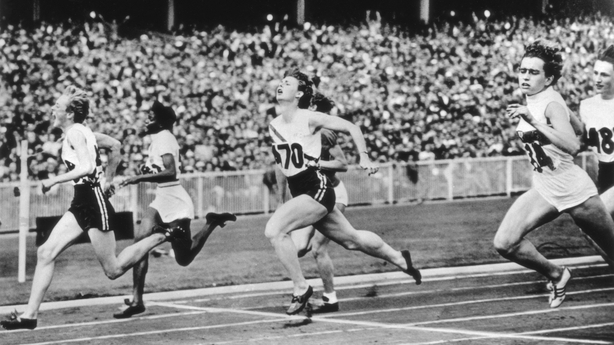 There was more delight for the crowd at the Melbourne Cricket Ground later in the week when she won the 200m, leaving German Christa Stubnick and fellow Australian Marlene Mathews to take silver and bronze as they had in the 100.

The 4x100m relay was a tighter affair but Cuthbert ran a magnificent final leg to cross the line in a world record time of 44.5 seconds and claim her third gold, unprecedented for an Australian at a single Olympics.

Cuthbert's place in the pantheon of Australian sporting greats was assured before she celebrated her 19th birthday and although she continued to set world records, she had to wait eight years for another taste of Olympic gold.

Injury had hindered her attempt to defend her titles in Rome in 1960 but, after a short-lived retirement, Cuthbert reinvented herself as a 400m runner and won the inaugural women's gold medal in the event in Tokyo in 1964.

Five years further on and Cuthbert discovered she had multiple sclerosis, an illness which she fought courageously until her death at the age of 79 in 2017.

In 2000, she carried the Olympic torch in her wheelchair at the opening ceremony of the Sydney Games, where Cathy Freeman would famously regain the 400m title for Australia.

"Betty is an inspiration, and her story will continue to inspire Australian athletes for generations to come," Freeman said upon Cuthbert's death.