Barr ran his second fastest time of the season in a red-hot contest that was won by Norwegian Karsten Warholm in 46.92 seconds.

That winning time has been bettered just once in history, when the USA's Kevin Young won the 400m hurdles final at the 1992 Barcelona Games in 46.78. 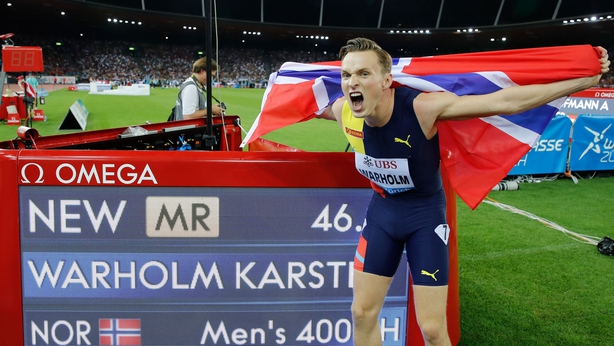 Running in lane seven, world champion Warholm was fractionally ahead of Benjamin off the final bend and fended off his rival's challenge to win it by six-hundredths of a second.

Benjamin appeared to be gaining near the finish line before Warholm found an extra gear and pulled away again to win in a time 0.14 seconds outside Young's world record.

Elsewhere American Sydney McLaughlin gave another glimpse of her potential when she won the women's equivalent race, beating Olympic champion and world record holder Dalilah Muhammad in the process.

McLaughlin, 20, was level with Shamier Little at the halfway point, with fellow American Muhammad also in the frame, but burst away on the second bend to win in 52.85 seconds, over one second clear of the field.

Little was second and Muhammad, who set a new world record of 52.20 at the U.S. championships last month, third.

"I am absolutely shocked and amazed," said McLaughlin. "This was a strong race. But it was not my cleanest one at a couple of hurdles. I need to work on that."

American Noah Lyles took the men's 100 metres crown when he powered past world champion Justin Gatlin to win in 9.98 seconds and claim his third Diamond League title, with the previous two in the 200 metres.

There was a dramatic final in the men's 800 metres where Nijel Amos led for most of the race only for the Botswanan to see the trophy snatched from him by American Donavan Brazier who stormed in from nowhere.

World champion and Olympic bronze medallist Sam Kendricks snatched the men's pole vault title by clearing 5.93 metres with his last attempt, pipping Sweden's Armand Duplantis who had already failed at that height but had the better scorecard.

Kendricks ran around the athletics track, arms aloft, milking the applause and apparently oblivious that the women's 1500 metres was underway, before going back to the field.

"I am exhilarated and exhausted," Kendricks said. "There are great competitors. Nothing was decided until the last moment, everybody was waiting to make this moment. It was a special moment."