Athletes with differences in sexual development (DSD) hoping to compete at the World Championships must submit to new rules curbing their levels of testosterone from Wednesday but Caster Semenya appears ready to resist the regulations.

Athletics chiefs had set a Wednesday deadline for DSD athletes to submit blood samples to their medical team with a testosterone level below five nanomoles per litre, which they must maintain over the next four-and-a-half months.

But double 800 metres Olympic champion Semenya posted a picture of a clenched fist with the word 'resist' on Twitter on Wednesday morning, a signal she will not comply.

The International Association of Athletics Federations (IAAF) has been heavily criticised for the rules, with allegations that the science is flawed, regulations ethically dubious and potential medical side-effects unknown.

One of the most vocal have been the World Medical Association (WMA), who urged their member physicians in 114 countries not to assist in the implementation of the regulations.

But the global body has responded in a letter to the WMA, saying the rules have been developed after 'many scientific publications and observations from the field during the last 15 years'.

"In 46XY DSD individuals, reducing serum testosterone to female levels by using a contraceptive pill (or other means) is the recognised standard of care for 46XY DSD athletes with a female gender identity. These medications are gender-affirming," the IAAF letter said.

The world governing body added that athletes who submit to the regulations will be assured of privacy.

"We have seen in a decade and more of research that approximately 7.1 in every 1,000 elite female athletes in our sport are DSD athletes with very high testosterone levels in the male range," the IAAF said on its website.

"The majority of those athletes compete in the restricted events covered by the regulations."

Semenya, who last month lost an appeal to the Court of Arbitration for Sport (CAS) to halt the implementation of the regulations, which cover races from 400 metres to a mile, appears firm in her decision not to comply.

Along with Athletics South Africa, she has 30 days from the CAS verdict on May 1 to launch an appeal to the Swiss Federal Tribunal, and repeated enquiries from Reuters over whether she would do so have not been answered.

"I will be here defending the world. I'm never going anywhere," a defiant Semenya told reporters after winning the 800 metres at the Doha Diamond League meeting last Friday.

"I believe in my legal team, they will do their best to get me back on the track."

But she also suggested that her return to Doha could see her compete over distances not covered by the regulations. 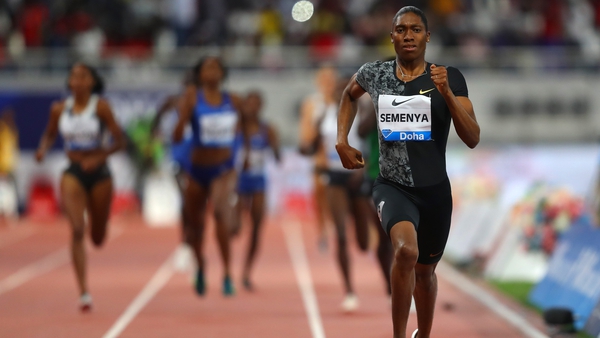 Semenya's future in doubt after she says no to medication