Mark English is through to the final of the 800 metres at the European Indoor Athletic Championships after a dramatic evening in Glasgow.

Two laps from home, Guy Learmonth of Great Britain tried to barge past English on the inside and tripped before falling in front of the Irishman.

Spain's Mariano Garcia won the heat, with English recovering to finish fifth in a time of 1:50.70.

However, Learmonth was disqualified after the race and English was awarded a place in the final on appeal.

The Irish runner will now line up in Sunday's final.

"It was so clear cut that I was impeded that I couldn't see any other way other than me getting to the final." - @markenglish_ tells @DavidGillick of his delight after his place in the 800m final at #Glasgow2019 is confirmed. https://t.co/ADYoANZ7MA pic.twitter.com/cGDGka8b3p

"We had to put the appeal in," English told RTÉ Sport after a meeting with tournament officials. "We looked at the video of the race and it was recommended that I be reinstated into the final.

"Thankfully, it worked out. I'm really happy about it and I'm excited to get out there tomorrow now and give it everything."

Englsh said he hadn't been worried that the decision might go against gim.

"It was so clear cut that I was impeded that I couldn't see any other way other than me getting to the final."

A disappointing night for Mark English, he is out of the 800m semi-final at the European Indoor Athletic Championships after a collision in his heat pic.twitter.com/y8YsJNv8hC

There were due to be four Irish sprinters in action this morning but Limerick's Ciara Neville was forced to withdraw with illness an hour before her heat in the women's 60m.

Best performing of the Irish sprinters was IT Carlow's Molly Scott, winner of the national champion at 60m in Abbotstown last week, a mere three hundredths of a second off qualification after placing sixth in her heat in a time of 6.43. 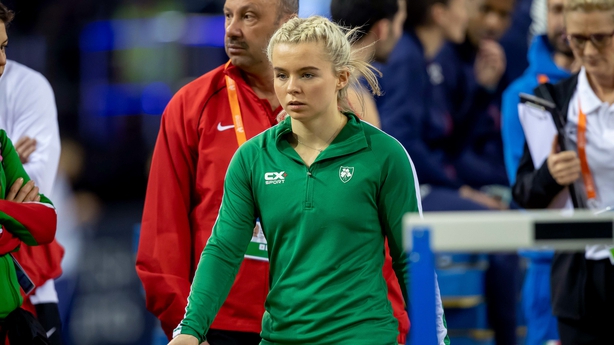 "I actually felt like I ran a really good race so I don't know exactly what went wrong," Scott told RTÉ Sport.

"I'm obviously really disappointed but I'll just have to take it into the next one.

"It's really hard to take actually because it's a long way off my PB and that's not what I came here to do."

"I actually felt like I ran a really good race so I don't know exactly what went wrong," says Molly Scott after missing out on the 60m semi-finals by just .03 of a second. https://t.co/7TyRpWnzer pic.twitter.com/3gXyfibu81

Tallaght's Joseph Ojewumi was first up in the men's 60m, placing sixth in his heat and registering a time of 6.97.

"Of course I'm disappointed but it was an amazing experience," Ojewumi told RTÉ Sport.

"It was tough going. I thought I had a decent start, my pick-up was decent but then I almost started to reach to the line a little bit, which wasn't part of the plan.

"It's my first international individually, I soaked it all in and really enjoyed it still."

City of Lisburn's Lauren Roy finished seventh in Heat 5, posting a time of 6.72.

"Compared to other competitions I've been in, it's so much bigger.

"I tried to get out quick because I knew it was a faster field. It didn't go as well as I planned. The time was probably one of my worst this season.

"But I'm looking forward now to getting into the outdoor season."