Ireland's Phil Healy has qualified for the 400m semi-finals at the European Indoor Championships in Glasgow after a strong performance in her heat.

The Cork woman progressed as the fourth-fastest runner-up, clocking a time of 53.13 in heat four of seven.

Running in lane six, Healy made a blistering start from the outside and held a commanding lead for most of the race.

She ran well throughout the first lap and still appeared to be in control heading down the home straight. But she started to fade in the final strides as the chasing pack closed in.

Healy then drifted back into third just before the finishing line, coming in behind Italian winner Raphaela Boaheng Lukudo and second-placed Deborah Sananes of France.

Healy didn't secure automatic qualification with that time and was forced to wait for the remaining three heats to unfold before clinching a spot in the semi-finals which will take place later this evening.

Phil Healy gives an immediate reaction after her 400m heat at the European Indoor Championships in Glasgow. Healy qualified for the semi-final and will be back on track this evening #rtesport pic.twitter.com/ak3mDRaEHq

Ireland's Sophie Becker was also running in the 400m but failed to qualify out of her heat.

Becker was in contention at the halfway stage, but dropped to the back at the stagger and finished in a time of 53.99, which was not good enough for a semi-final place.

Meanwhile, Thomas Barr and Cillin Greene failed to progress from their 400m heats earlier in the day in Glasgow.

Greene was the first Irish athlete in action today, but he failed to finish his 400m heat after a mid-race collision.

The Galway runner had the slowest season’s best time of all six competitors and the race represented a big step up in class for him.

"I’m disappointed I didn’t get to leave with a time or advance through the rounds but I’ll take a lot from it," he said. 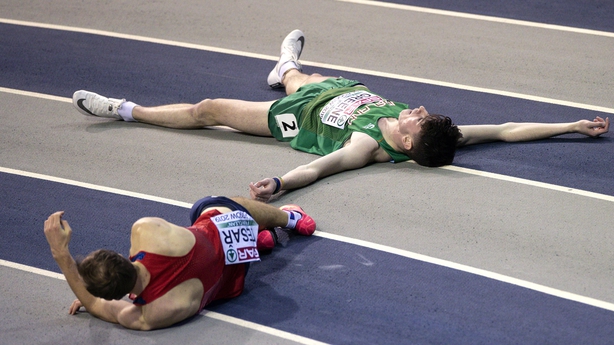 Greene got off to a strong start but at half-way mark he collided with Poland’s Karol Zalewski, although after a stumble, both runners recovered.

Distaster was to follow however, as race favourite Jan Tesar then ran into Zalewski before hitting the ground and Greene, who was right behind the Czech, couldn’t get out of the way and tripped over the prone Tesar and was unable to finish his race.

Barr was next up but never looked like challenging in his five-man heat.

Drawn in lane one, the Ferrybank runner was unable to reel in race leaders Karsten Warholm or Vitaliy Butrym.

Back in last place at the halfway stage Barr was unable to make any ground on the rest of the group and finished in a disappointing 48.22, well off his season’s best and way outside the qualifying time of 47.50.

"I’m frustrated that I didn’t get going but downs are part of the territory of the sport," said Barr afterwards. "I’ve had more ups than downs in my career. It was a bad day at the office but I’m motivated to move for the outdoor season."

Siofra Cleirigh Buttner was also unable to progress from the heats as she finished fourth in her 800m race in a time of 2:06:00, nearly three seconds off her season's best.

The Irish indoor record holder started brightly enough out of the blocks and looked comfortable at the midway stage as she was able to keep up with a quick pace and looked poised to strike and she sat back in fourth place.

However the pace of the race slowed in the second-half and when Cleirigh Buttner was unable to make her way into the top two, her time was well bellow the four best that progressed.

John Travers (Donore Harriers) and Sean Tobin (Clonmel) were the last two competitors in the first session in the men’s 3,000m heats.

Travers ran out of gas in the final laps finishing 14th in 8:12.54 in the first heat. The Donore Harrier was in a good position but said his legs felt "like concrete" in the last 800m.

That left Sean Tobin looking for a final spot, with the top four advancing automatically. Tobin delivered a battling display and closed hard in the last 400m but he just missed out in fifth in a season’s best of 7:56.29. The fastest losers all came from the first heat.

In the evening session, Sommer Lecky (Finn Valley) transitions from the U20 ranks in her first senior international in Group A of the women’s high jump qualification.

Ciara Mageean (UCD) will then be looking to make the final of the women’s 1500m in heat 2 of qualification.

Then there is a trio of Irish men in the 800m heats which includes Mark English (UCD), European indoor silver medallist from Prague 2015, Zak Curran (DSD) and Conall Kirk (Annadale Striders) making his Irish debut.

Rounding out potential Irish action in the evening session will be Phil Healy in the semi-finals of the women’s 400m.