Ciara Mageean set a new indoor record in the 1500m in Athlone tonight while Mark English served a reminder of his ability with a winning performance in the 2019 AIT International Grand Prix at Athlone IT.

The Irish pair highlighted their credentials as medal contenders for the European Indoors in Glasgow next month, while Thomas Barr narrowly lost out to Dutch runner Tony van Diepen in a sprint finish in the 800 metres.

With Phil Healy absent tonight after racing in New York last weekend, the performances of Ireland’s top runners came sharply into focus in the Midlands tonight and Mageean rose to the challenge with a superb display.

Her time of 4:06:78 eclipsed her previous personal best of 4:08:66 set back in 2016, with Romania’s Claudia Bobocea in second and Mageean’s training partner Anna Silvander of Sweden third in 4:13.80. Ireland’s Claire Tarplee was fourth.

It is Mageean’s second Irish record of the Indoor season. 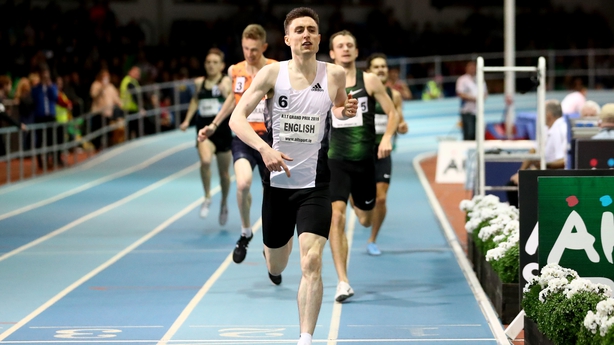 In the 800m final, English improved on last year’s second place to dominate the race.

The Letterkenny man, who will compete at the National Senior Indoors this weekend at Abbotstown, posted a winning time of 1.46.94

There was disappointment for Barr however when he was edged out by van Diepen. The Waterford sprinter posted a time of 47.05, .04 of a second behind the Dutchman with Ricardo dos Santos in third.