Gina Akpe-Moses couldn’t improve on her semi-final performance at the U20 World Championships 100m final where she finished eighth as Jamaican Briana Williams took gold.

The sprinter became Ireland’s first 100m finalist since 2000 where Emily Maher finished finished seventh when she qualified as the fastest runner-up in this afternoon’s semi-final.

Akpe-Moses posted a time of 11.51 to reach the final in Tampere, Finland, but in the outside lane this evening, she struggled as Williams edged out Twanisha Terry on the line.

World junior 100m finalist, came 8th overall. Not what I wanted but I can only come back stronger. I thank God letting it all happen and also all the support from my team. Big big things coming from me. It’s only just the beginning @irishathletics @UnderArmourUK @ANDYgPAUL pic.twitter.com/xeyU8wFQfT

"I just have to keep building and building," said Akpe-Moses on her fine achievement.

Earlier in the day there was disappointment as Ciara Neville was unable to join her compatriot in the final.

Neville was unable to join her team-mate after finishing fifth in the third semi-final with a time of 11.70.

The Limerick teenager has run 11.54 this season, but was unable to recover from a sluggish start, with Great Britain’s Kristal Awuah first across the line.

Aaron Sexton ran 21.06 for a lifetime best over 200m to automatically advance to the semi-finals with a fourth-place finish. He followed that up with fifth in his semi-final in a time of 21.33. 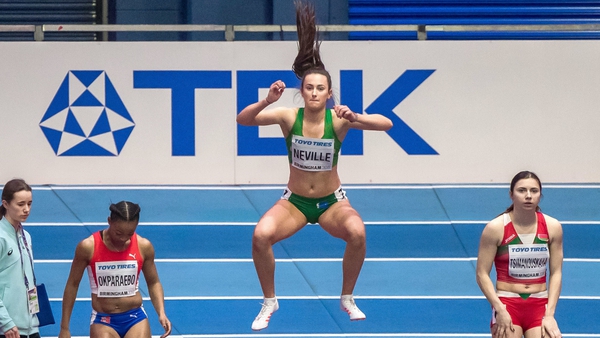