Russia has been banned from sending a team to February's Winter Olympics in Pyeongchang.

The International Olympic Committee announced the suspension of the Russian Olympic Committee (ROC) on Tuesday, meaning only invited Russian athletes will be allowed to compete and they will be considered neutral competitors.

The decision was reached after the IOC's 14-strong executive board received a recommendation from a disciplinary commission set up to investigate claims Russia conducted a state-sponsored doping programme that culminated at the 2014 Winter Games in Sochi.

As well as the immediate suspension of the ROC, the IOC announced a raft of sanctions against senior officials implicated in the scandal, including Russia's deputy prime minister Vitaly Mutko.

It has also fined the ROC $15 million to reimburse the costs of the various investigations into Russia's cheating and help set up the IOC's new independent testing authority.

IOC president Thomas Bach said: "This was an unprecedented attack on the integrity of the Olympic Games and sport. The IOC EB (executive board), after following due process, has issued proportional sanctions for this systemic manipulation while protecting the clean athletes. 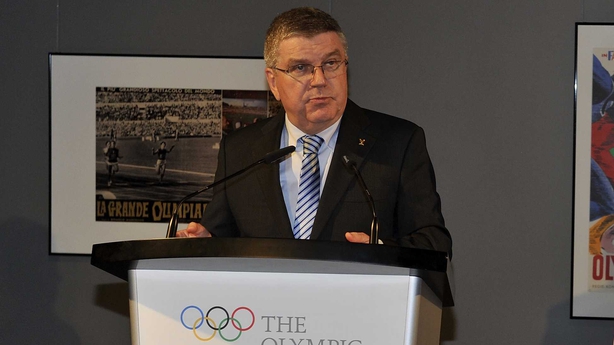 "This should draw a line under this damaging episode and serve as a catalyst for a more effective anti-doping system led by WADA."

Bach, a former Olympic fencer, added: "As an athlete myself, I feel very sorry for all the clean athletes from all NOCs (national Olympic committees) who are suffering from this manipulation.

"Working with the IOC athletes' commission, we will now look for opportunities to make up for the moments they have missed on the finish line or on the podium."

No official from the Russian ministry of sport will be accredited for Pyeongchang, the IOC said, and former sports minister Mutko and his ex-deputy Yuri Nagornykh will be banned from the Olympic Games for life.

The neutral-athlete sanction is based on the approach taken by athletics' world governing body the IAAF at the Rio Games in 2016 and at this summer's World Championships in London.

Any athlete who can prove that he or she has not doped - via a clean record verified by credible anti-doping agencies - will be able to compete in Pyeongchang as an 'Olympic Athlete from Russia (OAR)', in uniforms which bear that acronym, under the Olympic flag. The Olympic anthem will be played in any ceremony.

The IOC measures will have huge repercussions for football's world governing body FIFA and next year's World Cup in Russia, as Mutko is the president of the Russian Football Union and chairman of the Russia 2018 organising committee.

The former chief executive of the Sochi 2014 organising committee Dmitry Chernyshenko loses his position on the IOC coordination commission for Beijing 2022 and ROC president Alexander Zhukov is suspended as an IOC member. Other individual sanctions may follow.

The one olive branch offered to the ROC is that the IOC "may partially or fully lift the suspension" in time for Russia to participate in Pyeongchang's closing ceremony, "provided these decisions are fully respected and implemented".

Former Swiss president Samuel Schmid chaired the disciplinary commission that investigated the Russian state's involvement in the doping conspiracy, and he explained how it reached its conclusions.

He spoke immediately after the executive board's meeting, which was held in Lausanne.

First, he said the commission's findings were based on more than just the testimony of Russian whistle-blower Dr Grigory Rodchenkov, the former director of the Moscow anti-doping laboratory who fled Russia in November 2015 and is now in the witness protection scheme in the United States.

It was Rodchenkov who first revealed the remarkable scale of Russia's cheating between 2011 and 2015 - more than 1,000 athletes doped, across 30 sports - and it was his testimony which formed the basis of Canadian law professor Richard McLaren's independent investigation for WADA last year.

Rodchenkov provided the IOC commission with a 52-page affidavit, which Press Association Sport has seen, but Schmid said his team had spent the last 17 months corroborating every claim itself via testimony from other witnesses, forensic evidence, electronic records and further information.

Schmid said the "systemic manipulation" of the anti-doping rules in Russia was "unprecedented" and said the legal responsibility for this lies with the sports ministry, as the ultimate power in Russian sport, and the ROC due to its obligations via the Olympic charter and the signatory of the host-city contract for Sochi 2014.

In response to questions as to why the IOC was taking this hardline stance now but not in Rio, Bach said there was simply no time to corroborate Rodchenkov's claims then and due process had to be followed.

Since then, as well as Schmid's investigation, the IOC set up another commission, led by IOC member Denis Oswald, that has prosecuted cases against individual Russian athletes at Sochi. So far it is has disqualified and banned for life 25 athletes, stripping 11 medals.

Bach, in a press conference streamed on the IOC website, also said he hoped the winter sports superpower would not react by boycotting the Games but revealed that a member of the Russian delegation that came to Lausanne had apologised.

In his affidavit, Rodchenkov said: "I know I have disappointed many friends and colleagues with my duplicity while serving as director of the Moscow lab. Without excusing my actions, I hope all can understand the system in which I was operating.

"I hope my cooperation with the Schmid commission