Brian Gregan delivered another lung-busting display in London but his sixth-placed finish in his 400 metres semi-final was not enough to advance at the world championships.

The Clonliffe Harrier came home in 45.42 seconds, less than two-tenths outside his personal best, but was left trailing in the wake of Olympic champion and world record holder Wayde van Niekerk.

Gregan made a conscious decision to start conservatively and was already overhauled by those inside him by the end of the opening bend.

But the Dubliner held plenty in reserve, blasting past 2008 Olympic champion and Rio bronze medallist LaShawn Merritt in the home straight to take sixth. 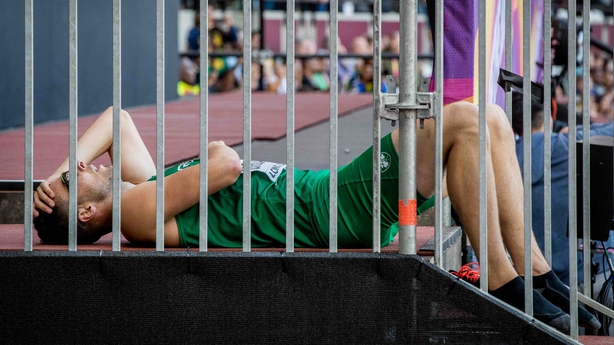 "I went out there and I had all the best guys in the world around me," Gregan said. "It was tough but I'm fairly satisfied. It’s the best event in athletics right now.

"I would have liked to have gone a bit quicker, I got a little isolated on the outside, and didn't quite run the race that I wanted.

"But I did the best that I could possibly do, 19th in the world, you can't really at smirk at that.

"These ae the first two times I've been beaten this year, and I need to be getting into these races, the Diamond Leagues, and the World Championships, to be competing and to bring me on."

Elsewhere, Belgium's Nafi Thiam added world heptathlon gold to her Olympic title with a comfortable victory in the multi-discipline event on 6784 points.

Thiam finished last of the 10 runners in her heat but had already built up an insurmountable advantage over rivals Carolin Schafer of Germany and Holland's Anouk Vetter.