Olympian Ciara Mageean is aiming to reach the final of the 1500 metres at the World Athletics Championships in London later this summer after promising signs at the Diamond League last week.

In advance of the season, the 25 year old sat down with her coach Jerry Kiernan to map out a race plan and set goals, with reaching that final top of her agenda.

"Last year I was very disappointed not to be in the Olympic final. I got to the semi-final and I was running very well until the last 200 metres," said Mageeen.

"I’m definitely taking strength from the seasons that are behind me and the training I’ve done. To make that final is my aim now; once you’re there, it’s anybody’s game. So I’ll go there and do my best with the green, white and gold on my back."

"Over the indoor season I struggled with that but I’ve learned from the mistakes of the past. If I could stay injury free there would be no stopping me but it is part and parcel of being an athlete."

Mageean, who was yesterday unveiled as brand ambassador for Pop Up Races, ran the World Championship qualification standard at the Golden Gala Diamond League race in Rome last Thursday.

"Hopefully I’ll be more of a regular name up on the Diamond Leagues, that’s my plan. It’s a fantastic stage to be on. It is the type of race where you go in, sit on a train and you are guaranteed some fast times, as long as you put the grind in and you know you are willing to hurt.

"If you are looking to compete at the top of the world athletics stage, that’s where you need to be. You need to be competing against those girls day in and day out. I want to stamp my claim and show that I belong there." 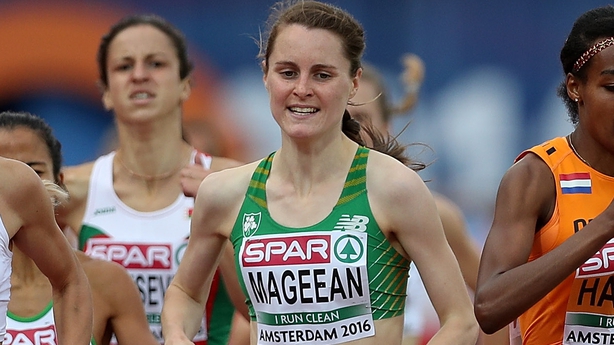 Back in March, Mageean was forced to withdraw from the European Indoor final due to an Achilles injury. It was a tough time for the Portaferry athlete but she has learned from her experience and is now better equipped to deal with injury and set-backs.

"As an athlete we thread a very fine line, we try to stay at the peak of our physical fitness. Whenever you do that, it’s a tightrope of being the best you can be and just tipping slightly over. There is always that risk of having injuries and you have to balance that.

"Over the indoor season I struggled with that but I’ve learned from the mistakes of the past. If I could stay injury free there would be no stopping me but it is part and parcel of being an athlete.

"I draw on all the experiences I have had and while you can draw on the junior experience you really need that senior championship experience behind you. It gives you the confidence that you can deal with the best in the world. And also you learn about the small things that happen in a championship.

"Even if it is going to have your lunch in a big dinner hall with all the best athletes in the world, sometimes that can be intimidating."

The European medalist has a busy schedule of races ahead; she plans to race in Sligo next week and then move on to the London Diamond League.