World champion race walker Rob Heffernan has admitted he was left “mentally and physically” broken after a disastrous performance at the European Championships in Zurich last month.

The Cork athlete bowed out of the 50km race, which was won by France’s Yohann Diniz in a world record time, around the 40km mark.

Speaking on RTÉ’s The John Murray Show, Heffernan said: “It was very, very disappointing. The first week I got home, it felt like a death, I was distraught. It was very hard. I’m still trying to process it all.

“It was very, very fast. My only objective after winning [the] World Championships last year [was] to go out and try and win it.

"And Yohann’s result on the day – he broke the world record by over two minutes – was phenomenal. It blew me away and it broke me. It broke me mentally and physically.

“For ten miles before I stopped I was going through complete turmoil and then everything just went negative. I couldn’t comprehend [it].

"I was at 25k and I was two minutes faster than I was in London and Moscow and everything was going to plan and yet this fellow was pulling away from me.

“I just couldn't believe it and then things just collapsed and I started going backwards.”

Meanwhile, Heffernan may be in line for another medal upgrade from the 2010 European Championships in Barcelona.

Heffernan finished fourth in the 20km race but was moved to the bronze medal position when winner Stanislav Emelyanov of Russia was eliminated for irregularities with his biological passport.

Now it has emerged that Italy’s Alex Schwazer, who finished second, is under investigation for doping violations. 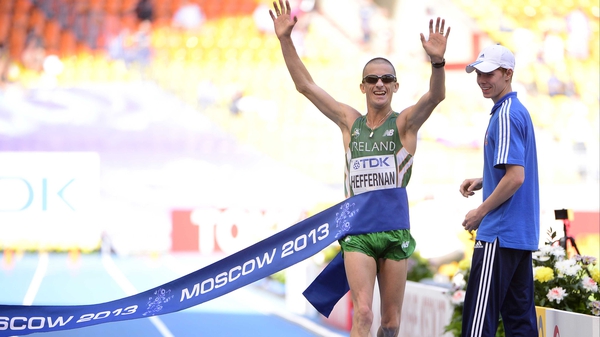 Rob Heffernan to bag 2010 bronze after Russian is disqualified