Jason Smyth has won gold in the T12 100m at the International Paralympic Comittee European Championships in Swansea this afternoon.

The Derry man won the event in his new class in a time of 10.78 seconds.

Smyth is the reigning world-record holder, Olympic and world champion at both 100m and 200m in his previous class of T13, which was only changed this week after his eyesight was found to have deteriorated since 2006.

Russian Artem Loginov was second in 11.16 with Joan Martinez of Spain claiming bronze in 11.19.

Speaking after the win Smyth said: “I’m really delighted to secure the medal for Ireland; I felt like I executed my race well so I’m looking forward to the 200m.”

Despite finishing .28 seconds outside his season’s best, into a -0.8 headwind it was an impressive performance from the Derry man.

The track is situated at the Swansea University International Sports Village which is right on the Welsh coast.

Meanwhile, wheelchair racer John McCarthy finished just 0.26 of a second away from a medal in the T51 400m final.

Based on times going into the final McCarthy, a Paralympic discus silver-medallist in 2004, was ranked sixth of the six finalists but the Cork man raced superbly to be in contention all the way to the line.

The race was won in 1:35.97 by Toni Piispanen of Finland with Peter Genyn taking silver in 1:36.07 and Italian Alvise de Vidi claiming bronze in 1:37.10 just ahead of Ireland’s McCarthy.

In the final of the T37 100m, seventeen year old Heather Jameson finished eighth in the in time of 15.64 seconds.

A top-class final was won by reigning World champion, World and European record holder Mandy Francois-Elie of France in 13.92.

Dubliner Jameson, who was considerably younger than all but one of the other finalists, will have gained further valuable experience at this level. 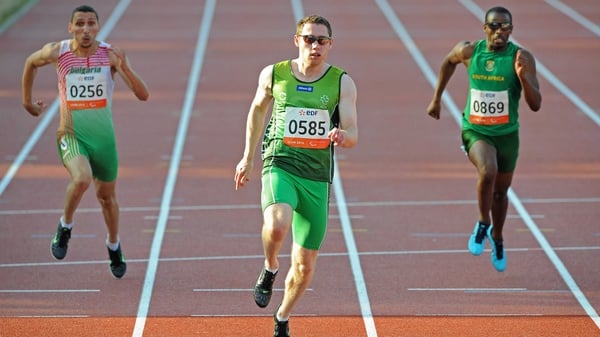