Despite finishing in a heartbreaking fourth place, Paul Robinson says he will build on his 1500m final performance at the European Track and Field Championships in Zurich.

The St Coca’s runner was in contention for a medal but was edged out on the home straight in today’s final.

Speaking to RTÉ Sport after the race, the 23-year-old said: “I’ll take confidence out of that, I kicked down some really good people today.

"Hopefully, going into the Worlds and the Olympics in two years’ time, this will be of great benefit to me.

“I think I did everything right. It’s just one of those things, the last 30 metres – I had it and then it got taken away from me and I’m absolutely gutted.

“When you line up in the 1500m you expect you’re going to be in for a fight and that’s what it was today."

Meanwhile, Ciaran O’Lionaird says he will learn from his disappointment in the same race after being tripped with about a lap and half to go and failing to finish.

The Cork man gave RTÉ Sport his view of the incident: “I just got stood on, stood on first in the back straight and then twice, badly, with 600 to go and then I landed on my right hamstring.

“I felt it up through there and then someone stood on my left tendon. Instantly, my hamstring pulled up, like a cramp-type pain and I just got thrown off kilter.

“It’s unfortunate – I felt really good out there, finally getting back to where I think I need to be. It’s disappointing, you kind of feel hard done but that’s championship racing and I’m sure I’ll be better for the experience.”

“I think I did everything right. It’s just one of those things, the last 30 metres – I had it and then it got taken away from me and I’m absolutely gutted." - Paul Robinson

Meanwhile, Brian Gregan, who ran the first leg of the Irish team’s 4x400m relay final, was thrilled that the team broke the Irish record in a time of 3:01.67, finishing fifth overall.

“I think a big thing for us is to get camps together, get us training together, baton changes, doing the odd session here and there together and I think the world relays is a massive chance for us.

“Finishing fifth today means we’ll probably get invited to the European Indoors next year so we’ll build from that. 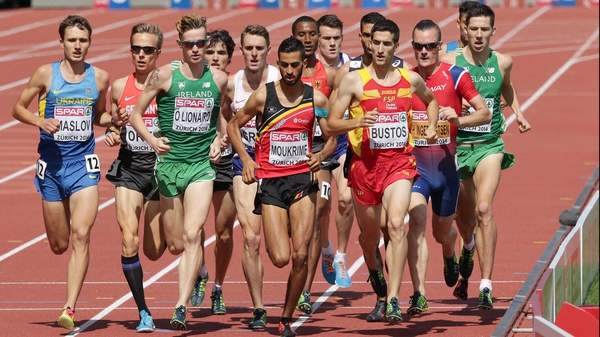 Robinson edged out of medals as O'Lionaird falls