Mark English has claimed the bronze medal in the men's 800m final at the European Track and Field Championships in Zurich.

English turned in a hugely impressive display to run a season best equalling 1:45.03 and looked to be set for silver only to be pipped by Artur Kuciakpsi of Poland on the line.

It was a 1-2 for the Poles as Adam Kszczot took the gold medal. 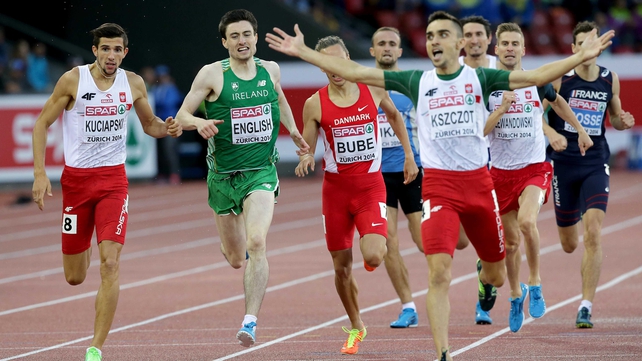 Twenty-one-year-old English ran an intelligent race, staying slightly off the pace in a very fast first lap and had slipped back to seventh at the bell.

Frenchman Pierre-Ambroise Bosse set a blistering pace and completed the first lap in a time of 50:97, but he wasn't able to keep it up.

As the pace slowed, the Donegal man's tactics proved their worth and he scythed through the field to work his way up to second only to be edged out by Kuciakpsi on the line.

"I've been training for the last few years to get a medal on this stage.

"I changed my tactics because I went too hard in the semi-finals. I knew Bosse would take it out, but I had a lot of energy left in the last 200m."

Heffernan had been in third place during the early stage of the race but the Cork man began to struggle as the leaders upped the pace and he pulled up at the 40km-mark due to fatigue as he slipped down the field.

France's Yohann Diniz smashed the world record by over two minutes to win the gold medal in 3:32:33.

There was good news, however, for middle-distance runners Paul Robinson and Ciarán O’Lionáird who both qualified for Sunday’s 1,500m final in their semi-finals today.

Kildareman Robinson put in a magnificent run to seal automatic qualification when the 23-year-old finished fourth in his heat in a time of 3:39.83.

Corkonian O’Lionáird booked his spot in the final as one of four fastest losers after the Leevale runner came seventh with a time of 3:39.79 in his semi-final.

Mark English is the only other Irish athlete in action today, the Donegal man will line out in this evening’s 800m final at 1855.