Jamaica's double Olympic sprint silver medallist Yohan Blake has been ruled out for the rest of the 2014 season after undergoing a surgery on an injured hamstring.

The 24-year-old sustained the injury in the 100 metres at the Glasgow Grand Prix on 11 July.

"Right now he's on crutches, he had to have an operation a couple of days ago," his coach, Glen Mills told Reuters.

"The injury was quite severe and the original prognosis was misdiagnosed and he went Germany and when they had a good look, they realised that it was more serious and required surgery, so he'll be out for quite a long time."

Blake, who could not defend his 100m world title in Moscow last year because of a hamstring injury, had opted against racing at the Commonwealth Games in Glasgow starting on Wednesday to concentrate on his build-up to the 2016 Olympics in Rio de Janeiro.

"I am down but just a little. I'm still going to fight even harder for everyone who continues to support me," Blake said in his Facebook message to his fans.

"I feel I owe it to the sport and the fans. Thanks for all the good wishes. It really means a lot," added the 2011 world 100m champion. 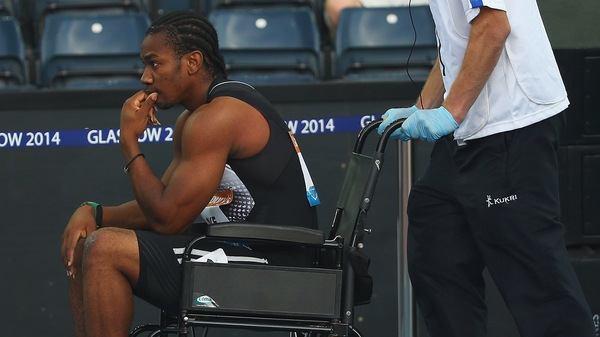