Amy Foster (City of Lisburn AC) put in a stellar performance at the National Senior Indoor Track and Field Championships in Athlone to win the women’s 60m final in 7.32secs.

This time was also the qualification standard for the World Indoor Track and Field Championships in Sopot, Poland in March. Phil Healy (Bandon AC) was second with 7.37secs, with Niamh Whelan third (7.65secs).

“The aim was to come out here and win and I achieved that. I knew to win I needed to run fast as Phil Healy has been in flying form,” Foster said after the race.

“I didn’t have the best of starts but my pick-up and finish were good and overall I’m really happy with the race. It was great to get the PB and the qualification time for the world indoors – it’s a pretty perfect day.” 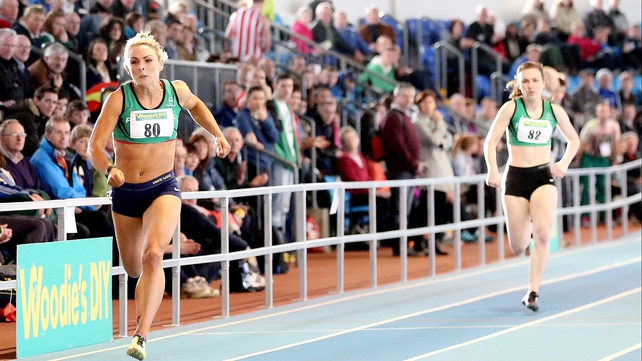 It also brings her total tally of indoor titles to 16 making her the most prolific winner of indoor national titles.

Lawler said: “I’m over the moon, recording a new national junior record, stadium record and the qualification standard for the World Junior Track and Field Championships”.

Earlier in the day, Lawler finished second in the men's 60m in 6.95secs with Jamie Davis (Raheny AC) recording the same time for third. The race was won by David Hynes (Menepians AC) in 6.85secs. Steven Colvert (Crusaders AC), who recorded a personal best of 6.84secs to win his semi-final earlier in the day, withdrew from the final due to a slight niggle.

The men’s 400m proved to be a thrilling race with Timmy Crowe (Dooneen AC) and Richard Morrissey (Crusaders AC) leading the charge to the break and Thomas Barr (No 178) (Ferrybank) sitting in behind. 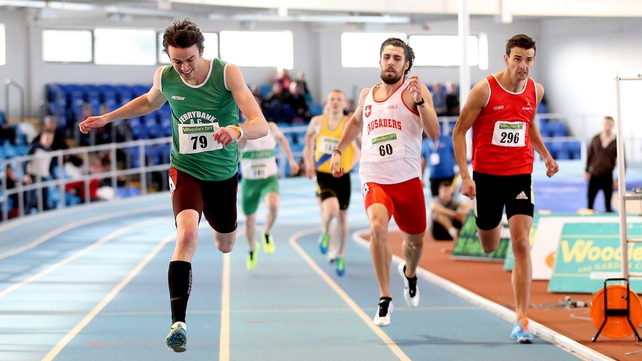 Barr made a move down the back straight to take the lead and he powered to finish winning in 47.05secs, Crowe was second in 47.51secs and Morrissey third in 47.56secs.

Sinéad Denny (DSD AC) was the clear winner in the women’s 400m, winning in a personal best of 54.30secs. 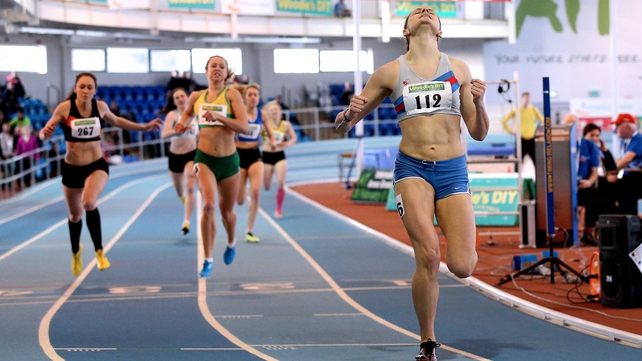 There was a real battle between reigning champion Shauna Cannon (Brothers Pearse AC) and Ciara McCallion (Clonliffe Harriers AC) down the home straight with Cannon taking silver in 55.56secs from McCallion in bronze in 55.67secs.

With Roseanne Galligan (Newbridge AC) having to withdraw due to illness the expected battle between herself and Ciara Everard (UCD AC) in the women’s 800m did not transpire. Everard regained her title winning in 2mins 06.23secs. 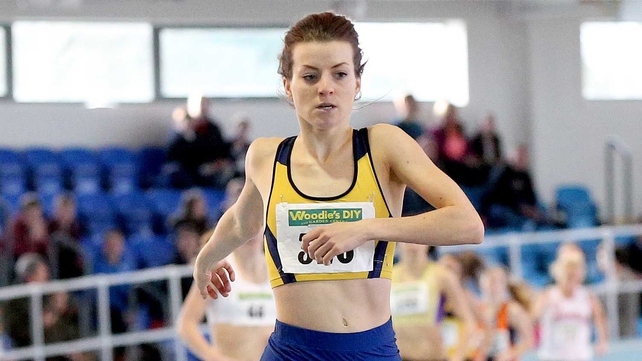 With the newly crowned men's Irish 800m Indoor Senior Record holder Mark English (UCD AC) withdrawing from the championships during the week due to illness it left the battle for the National title wide open with Niall Touhy (No 83 below) (Ferrybank AC) taking the honours in 1min 52.24secs. 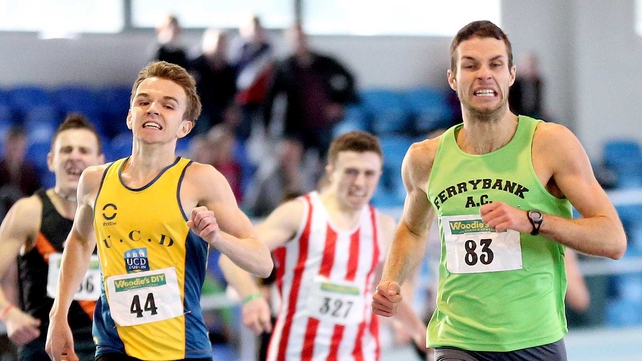 David McCarthy (West Waterford AC) dominated the men’s 1500m (image below) taking the race out with 800m to go, he crossed the line in 3mins49.50secs with Letterkenny’s Danny Mooney second in 3mins52.14secs and Darragh Greene (Dunleer AC) third in 3mins54.85secs. 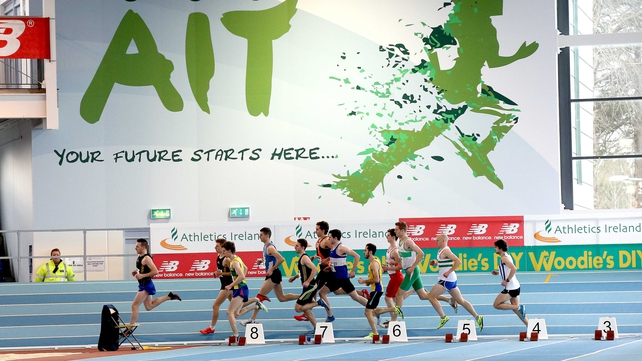 In the men’s 3000m, it was defending champion John Travers (Donore Harriers AC) who set the early pace but Alex Bruce Littlewood (Leevale AC) reeled him back in to win in 8mins02.13secs. 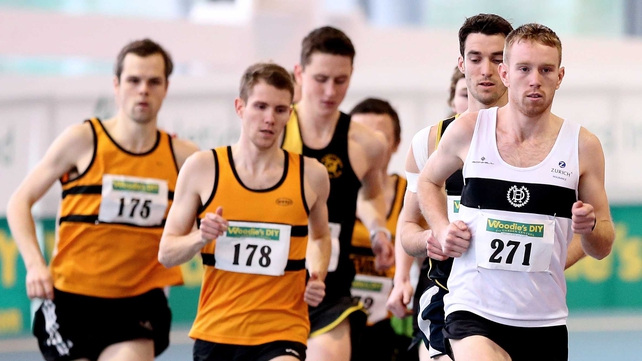 Eoin Everard (Kilkenny City Harriers) went onto claim silver in 8mins10.57secs with Travers paying for his early pace having to settle for third in 8mins14.73secs.

In the women's 60m hurdles Sarah Lavin (UCD AC) put in another solid performance, running 8.33secs to take the title from Catherine McManus (Celtic DCH AC) who powered to second in a personal best of 8.48secs.

In the women’s pole vault Zoe Brown cleared a personal best of 4.31m and set an all-comers’ record. 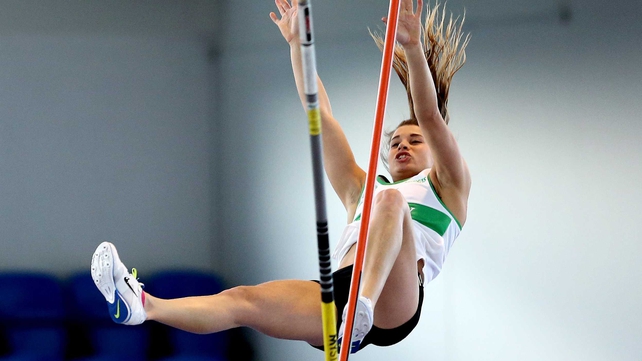 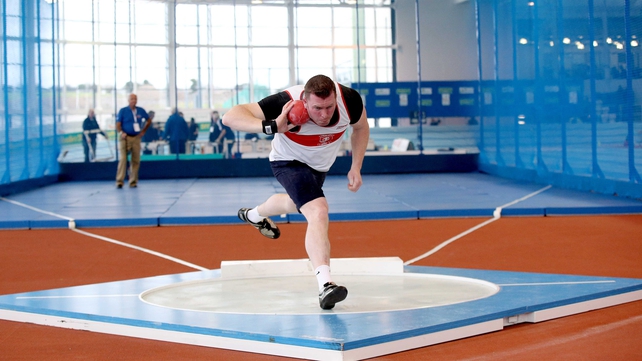 Kourosh Foroughi (Star of the Sea AC) recorded one of his best jumps in recent times when taking the national high jump title in 2.15m.

Caoimhe King (Aughagower AC) was close to her best when taking the triple jump title in 12.84.

Elsewhere, World champion Robert Heffernan (Togher AC) was in action at the Millrose Games in New York where he finished second in the 1 mile walk in a time of 5:39.7. The race was won by  Andreas Gustafsson of Sweden in 5:34.45. 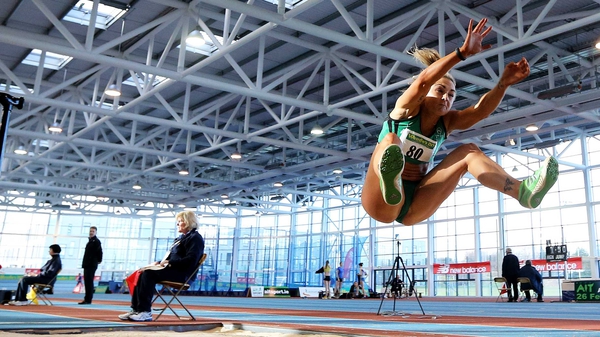