Marian Heffernan has described her husband Rob’s gold medal at the World Athletics Championships as vindication for ten years of hard work.

Speaking to RTÉ Sport after the race she said: “I’m just delighted for Rob and our kids. Everything that he aimed for this year was about getting a result here.”

Marian, herself an international 400m runner, was on drinks duty during the race, and knew that her mood could affect her husband’s as he entered the closing stages.

“I had to stay so controlled with the drinks because he will feed off me being anxious or nervous. The last drink was the last contact I would have with him until he finishes.

"The second I gave him the drink I just ran into the stadium and saw him crossing the line.”

The result came as no surprise, with Heffernan having gone so close to medals at major championships before, including a fourth-place finish at the London Olympics.

“He was unlucky in London, he was unlucky in Barcelona twice and he has had a couple of competitions where he has been fourth. I knew he could do it, he just needed a good race.

“I think I needed to stay more calm for him than him for me.”

The victory was a team effort with coach Ray Flynn among those who played a major part in Heffernan’s success.

She continued: “Ray has been involved with him for 20 years. The stories that’ll be told tonight. It’s going to be fantastic. Everybody played a part in his result. I just can’t wait to switch off and enjoy.” 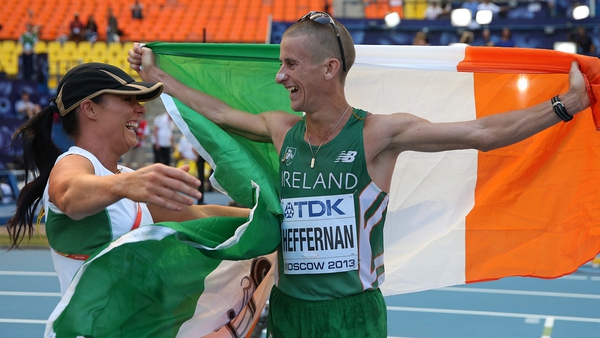