Yelena Isinbayeva, the greatest woman pole vaulter of all time, thrilled a partisan home crowd roaring her every jump when she landed the third and probably last world title of her illustrious career on Tuesday.

The Russian, twice Olympic champion and world outdoor record holder, was the only vaulter to clear 4.89 metres.

It was a season's best leap for the 31-year-old, the first woman to clear the revered five metres barrier, who said before the championships that she would retire.

After a nervous start when she failed with her first attempt after entering the competition at 4.65, a measure of her confidence with her rivals already up and running, Isinbayeva grew in stature.

With a chorus of "Yelena Yelena" reverberating around the Luzhniki stadium, the biggest crowd of a poorly attended championships so far, each clearance was greeted by a cacophony of approval.

Isinbayeva rewarded the support with punches in the air and squeals of delight. When gold was assured she ran to the crowd and embraced her coach.

Milking the moment and urging the crowd to raise the decibel level further, she asked for the bar to be raised to 5.07, one centimetre above the world record she set in 2009.

Three unsuccessful attempts followed but it could not spoil the former gymnast's celebrations as she set off for a lap of the track which featured a cartwheel and back-flip.

Isinbayeva was virtually unbeatable between 2003 and 2008, when she kept raising the bar higher and higher, often by a centimetre at a time.

But plagued by injury and poor form and after failing to register a height in the 2009 world championships, she decided to take a break from the sport, returning after an 11-month absence.

She was again outside the medals at the 2011 worlds but took bronze at last year's London Olympics.

The fourth-longest throw of the season, was too good for perennial runner-up Piotr Malachowski of Poland who took another silver. 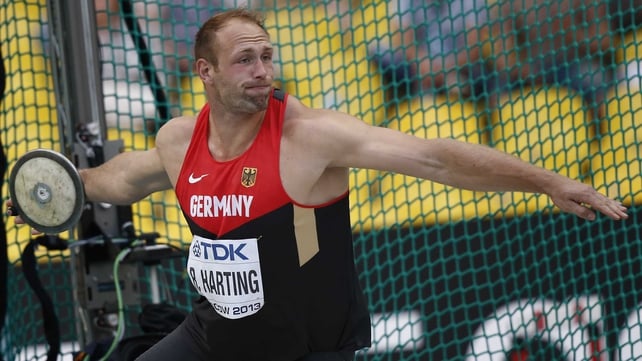 Harting, also the Olympic and European champion, has been the most consistent performer all season but with Malachowski the only man to break 70 metres this year it was always likely to be close.

The German set the early pace with a 68.13-metre second throw then, after clattering his third into the cage, launched his gold-winning fourth.

Malachowski responded strongly but his 68.36 was not enough and Harting, with the title in the bag, sent his final throw 68.08.

Former world and Olympic champion Gerd Kanter of Estonia took the bronze with 65.19. 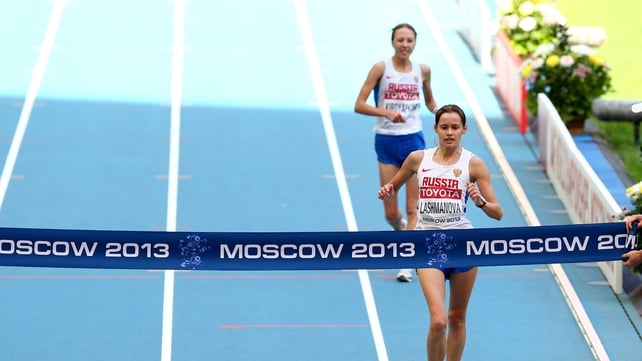 The world record holder secured a first world title but had only three seconds to spare at the line over team mate Anisya Kirdyapkina after twice almost breaking stride on her final lap because she did not know where the race ended.

Lashmanova clocked 1:27:08 on a hot morning in the capital, getting a rousing reception as she entered the Luzhniki stadium.

A fast-closing Kirdyapkina could not quite close the gap despite her younger rival's slip-up, while China's Liu Hong took bronze in 1:28:10.

Race walking superpower Russia were denied a podium sweep after Vera Sokolova, who was in third place, was shown a third yellow card and disqualified soon after entering the arena with just over one lap of the track to complete. 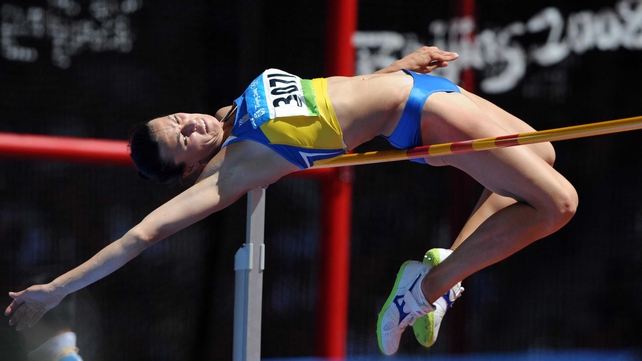 With 68 points separating the top two going into the final 800 metres event, Theisen Eaton needed to finish 4.69 seconds ahead of Melnichenko to take gold but the Ukrainian shadowed her rival round the two laps.

She collapsed on the track after crossing the line and held her head in disbelief as the final result flashed up, bringing the hundreds of Ukrainians in the crowd to their feet.

Melnichenko finished the seven events with a personal best total of 6,586 points, 56 more than Theisen Eaton.

World junior champion Dafne Schippers of the Netherlands charged down the home straight to finish third and secure the bronze medal with a national record of 6,477.

Ethiopia's Aman takes 800m gold medal
A grimacing Mohammed Aman hurtled to the front in the final ten metres to become the first Ethiopian to win an 800 metres world title. 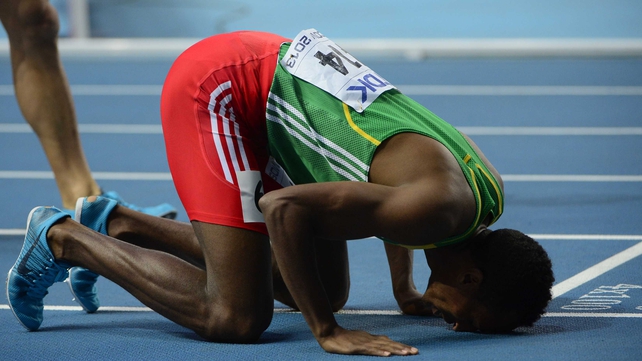 Aman, the only man to beat world record holder David Rudisha since 2009 and pre-race favourite in the absence of the injured Kenyan, pipped American Nick Symmonds for victory in 1:43.31.

It was Ethiopia's first world gold at a distance below 5,000 metres.

World indoor champion Aman, a disappointing sixth in last year's amazing Olympic final in which Rudisha smashed the world record, found himself boxed on the inside on the final lap but as the pace wound up towards the finish he found space for his late charge. 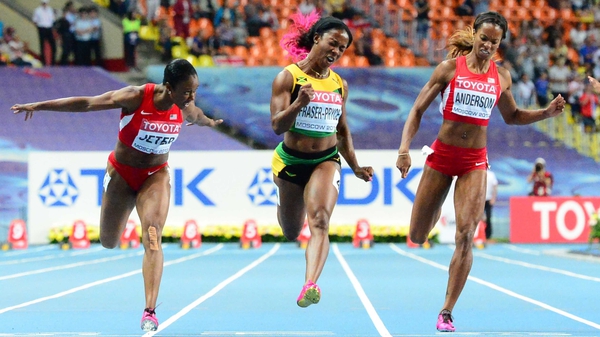