Olympic champion Usain Bolt ran 19.58 seconds for victory in the 200 metres at the Lausanne Diamond League meeting on Thursday while Yohan Blake equalled the third fastest time ever to win the 100 in 9.69.

Bolt predictably dominated his race, comfortably winning ahead of Dutchman Churandy Martina and Nickel Ashmeade as the top three all finished in under 20 seconds.

Blake, Olympic silver medallist in the 100 and 200 metres, beat his previous best by 0.06 seconds as he destroyed a world-class field in the 100 metres American Tyson Gay and fellow Jamaican Nesta Carter were left trailing in his wake. 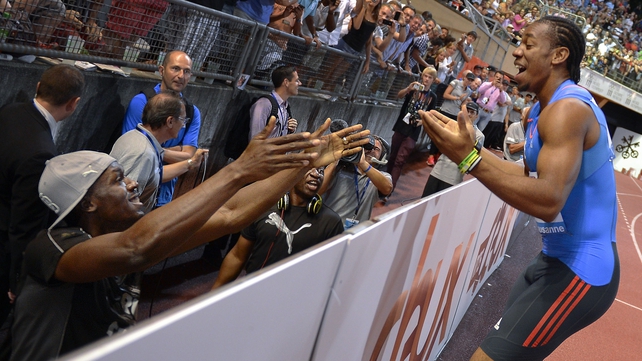 Olympic champion Aries Merritt was disqualified for a false start in the 110 metres hurdles, devaluing what was billed as one of the highlights of the evening.

Merritt's fellow American, Olympic silver medallist Jason Richardson, took advantage as he led from the front to win in 13.08 seconds, ahead of David Oliver and bronze medallist from London Hansle Parchment.

Grenada's Kirani James overcame a sluggish start to win the men's 400 metres, the world and Olympic champion coming back strongly in the third 100 before powering clear down the final straight to win by several metres in 44.37.

Dominican Republic's Luguelin Santos was second in a repeat of the Olympic final.