Ireland’s Joanne Cuddihy had mixed emotions after her disqualification from the women’s 400m heats at the European Championships in Helsinki this afternoon.

The Kilkenny athlete finished comfortably third in her race, but was adjudged to have left her lane by officials.

The 28-year-old has been suffering with tonsillitis, and admitted her participation in the heats was in doubt up until today.

“To be honest it wasn’t the best build-up. I’ve been unwell all week, and I had to make a call whether to run today,” Cuddihy told RTÉ.

“I am glad I ran because I think I was physically ready for it. Unfortunately, I just lost my balance around the bend.

“I should have learned my lesson from this morning’s 400m men. I knew it is an unusual track, and I think at least seven of them got disqualified earlier on today, which is outrageous really.

“I’m not sure what caused me to lose my balance, but just one stutter and I knew my foot had hit my line.”

The Olympics-bound athlete said she was unsure at the time if that action was enough to get her disqualified, and this confusion caused her to lose focus.

“At that point I lost my concentration. Next thing I knew two girls had come up my inside.

“I felt I was in control of the race up to that point, and had I not stumbled I feel like I would have easily pulled away with that one and had a nice qualification to the semi.”

While disappointed at the outcome, Cuddihy insisted she has bigger goals for the season and would not get too down about it.

“At the end of the day, this is supposed to be a trial run for London.

“Like I said, I have been on antibiotics and had tonsillitis all week, so I wasn’t entirely sure I’d even run today.

“So I’m not as disappointed as I suppose I would be if it was a bigger championship.

“At the same time, going on the season I’ve had, (this) could have been my championship really. That’s the slowest time I’ve run in a long while.

Asked about the possibility of an appeal, Cuddihy said she would seek clarification on the rules before deciding what course of action to take.

“I have to go talk to management now to see what’s going on. I’m not too clear on the exact wording of the rules, etcetera, but sure we’ll look in to it.” 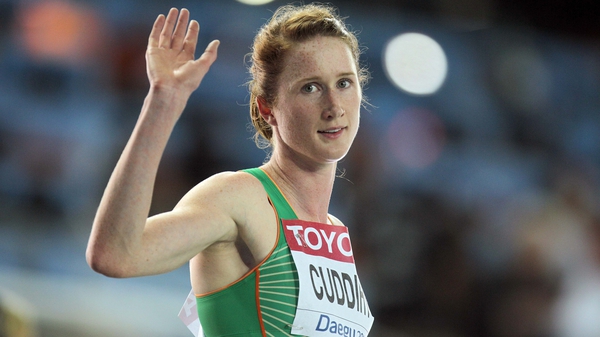