On this week's programme, our focus is Dublin during the Irish War of Independence. Myles Dungan is joined by Brian Hughes, Catherine Scuffil, Michael Foley and Cuan Ó Seireadáin. 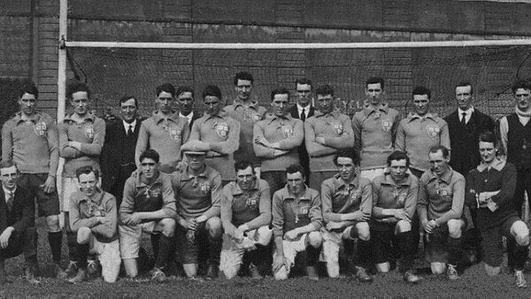 As we continue our series on the Irish War of Independence, tonight, we turn our focus to one of the most active and intense theatres in that conflict – Dublin.

Plus…Bloody Sunday. One of the most violent days in the War of Independence, when The Squad carried out an audacious series of co-ordinated shootings on unsuspecting British agents. And – the carnage that followed at Croke Park, when the Crown Forces carried out a brutal reprisal, opening fire on a crowd of innocent civilians.

But we begin this evening at 6 Harcourt Street in Dublin. There stands an elegant Georgian Townhouse, that today serves as the Headquarters of Conradh na Gaeilge. The building has a long association with the nationalist movement – serving at one time as the Headquarters of Sinn Fein, and as the Dáil’s ministerial offices in the early part of the war. Lorcan Clancy visited 6 Harcourt Street to meet curator Cuan O’Seireadan, and find out more about the buildings revolutionary heritage.

Myles is joined throughout this programme by three guests – Brian Hughes is a Lecturer in History at Mary Immaculate College in Limerick.

Cathy Scuffil is a Dublin City Council Historian-in-Residence for the South Central Area.

And from our Cork studio w'ere joined by Michael Foley, a journalist with the Sunday Times, a member of the GAA’s history and commemorations committee, and the author of the 2014 book The Bloodied Field – an account of Bloody Sunday in Croke Park, in November 1920.