On this week's programme, Myles Dungan and guests discuss the experience of women during the Irish War of Independence. We hear from Marie Coleman, Mary McAuliffe, Tomás Mac Conmara, Ailbhe Rogers and Lindie Naughton. 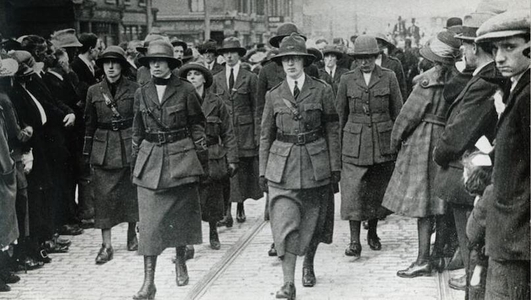 Irish War of Independence - Women of the Revolution

As we continue our series on the Irish War of Independence, tonight our focus is on the women of the revolution. We’ll hear about the vital role they played in the conflict and how Cumann na Mban served as the eyes and ears of the republican campaign. We’ll also discuss the physical and mental trauma of the war, and the gendered violence, perpetrated by both the IRA and the Crown Forces.

In a report from Colette Kinsella, we hear from Lindie Naughton on the experience of Countess Constance Markievicz during the war. Lindie is the author of two books on the Countess, including last year's volume Markievicz: Prison Letters and Rebel Writings