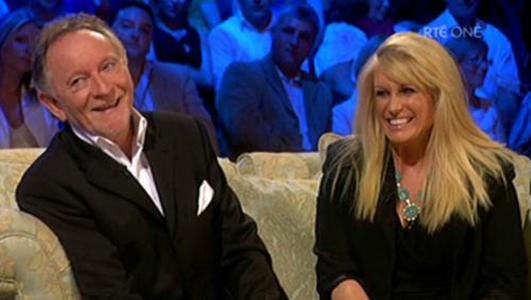 They recall their meeting in the 1970s when Phil was looking for a singer to represent Luxembourg at the Eurovision Song Contest. It was love at first sight and they recall the night of the contest in Stockholm and the song Geraldine sang called Toi.

Their relationship flourished and they have had six children together. But they didn't marry until the late 1990s when changes in Irish divorce laws allowed Phil to propose. They spent their honeymoon in Rome with their children.

Phil grew up in Derry, Geraldine in Dublin. Their parents were musical. They were concerned when Geraldine and Phil chose careers in music. But the Eurovision re assured their parents that a career in music was possible - in Phil's case, his Eurovision win with Puppet On A String in the 1960s, in Geraldine's case with her Eurovision appearance in the 1970s.

Phil is well known as a songwriter. Geraldine particularly loves his song Steal Away, his own favourite song is The Town I Love So Well. They talk about how Phil's songs have been interpreted by other singers, including Scorn Not His Simplicity and they also talk about The Shores of Lough Swilly, a song which remembers his sister who tragically drowned.

Phil and Geraldine perform on this programme. They are touring Ireland at the moment.