Each of the last eight years, if projections for 2022 hold, will be hotter than any prior to 2015, the UN has said, detailing a dramatic increase in the rate of global warming.

Sea level rise, glacier melt, torrential rains, heat waves - and the deadly disasters they cause - have all accelerated, the World Meteorological Organization said in a report as the COP27 UN climate summit opened in Sharm el-Sheikh, Egypt.

"As COP27 gets under way, our planet is sending a distress signal," said UN chief Antonio Guterres, describing the report as "a chronicle of climate chaos".

The UN's weather and climate body released its annual state of the global climate report with yet another warning that the target to limit temperature rises to 1.5C was "barely within reach".

Countries agreed under the Paris climate treaty in 2015 to curb warming to "well below" 2C and pursue efforts to limit it to 1.5C above pre-industrial levels to avoid the worst impacts of climate change, but a lack of action has led to warnings that the 1.5C goal is slipping away.

That puts 2022 on track to be the fifth or sixth warmest year on record, in the face of a rare triple-dip La Nina weather phenomenon in the Pacific which has naturally cooled global temperatures for the past two years.

But the WMO warned that did not mean there was a reversal in the warming trend.

The eight years since 2015 are likely to be the eight warmest years on record, and the impacts of global warming are becoming more pronounced.

Glacier melt records were shattered in the European Alps, with average loss of three to four metres of ice thickness throughout the mountain range - substantially more than the previous record year of 2003.

In Switzerland, 6% of the glace ice volume was lost between 2021 and 2022 and for the first time in history no snow lasted the summer, so there was no accumulation of fresh ice.

Between 2001 and 2022, glacier ice in Switzerland has declined by more than a third.

The report said a low snowpack at the end of winter, and repeated coverings of Saharan dust - which darkens the surface and encourages more melting - set the scene for unprecedented ice loss between May and September this year as a result of the heatwaves that hit Europe.

The rate at which sea levels are rising has doubled since 1993, with the acceleration due to increasing ice melt, the WMO report said.

Just since January 2020, sea levels have risen by nearly 10mm to a new record high this year. 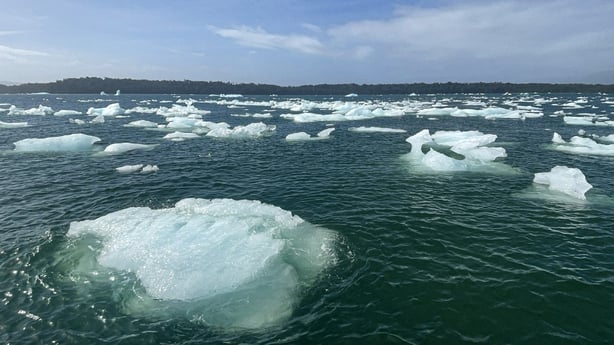 Ocean heat was at record levels in 2021, the last year assessed, while this year Arctic sea ice extent was below the long term average for most of the year, and Antarctic sea ice dropped to its lowest level on record in February.

Below average rainfall for the past four years in East Africa has fuelled drought and a food crisis in the region, record breaking rain cause devastating flooding in Pakistan - and China and Europe, including the UK, were hit by record heatwaves and damaging drought and wildfires.

And there was no let up in the greenhouse gases driving climate change, with the three main pollutants, carbon dioxide, methane and nitrous oxide reaching record levels in 2021 and monitoring shows they continued to rise in 2022, the WMO said.

WMO secretary-general Petteri Taalas said: "The greater the warming, the worse the impacts.

"We have such high levels of carbon dioxide in the atmosphere now that the lower 1.5C of the Paris Agreement is barely within reach."

He warned it was "already too late for many glaciers" and melting would continue for hundreds if not thousands of years, with major implications for water security.

Sea level rises would add up to half a metre over a century, proving a long-term and major threat to many millions of coastal dwellers and low-lying states.

And he said that while, all too often, those least responsible for climate change suffer most, even "well-prepared societies this year have been ravaged by extremes".

Responding to the report, Mr Guterres said: "We must answer the planet's distress signal with action - ambitious, credible climate action. COP27 must be the place - and now must be the time."