Met Éireann has confirmed that Ireland has officially experienced a heatwave with temperatures having topped 25C for five days in a row.

The hottest places in Ireland today were Oak Park in Carlow (30.7C) and Moore Park near Fermoy in Co Cork (30.6C).

It comes as a Status Yellow thunderstorm warning was issued for the entire country for tomorrow with very warm weather is expected to continue into Monday.

The warning will come into effect from 3pm tomorrow until 3am on Monday, with what Met Éireann said will be "hit and miss thunderstorm activity along with hail and heavy downpours", which could lead to spot flooding and hazardous driving conditions.

A Status Yellow High Temperature warning for Ireland remains in effect until 6am on Monday, with highs of up to 30C forecast, although parts of Leinster and Munster may experience higher temperatures.

The hottest August day in Ireland since records began occurred yesterday when temperatures of 31.7C were recorded at Oak Park in Carlow. 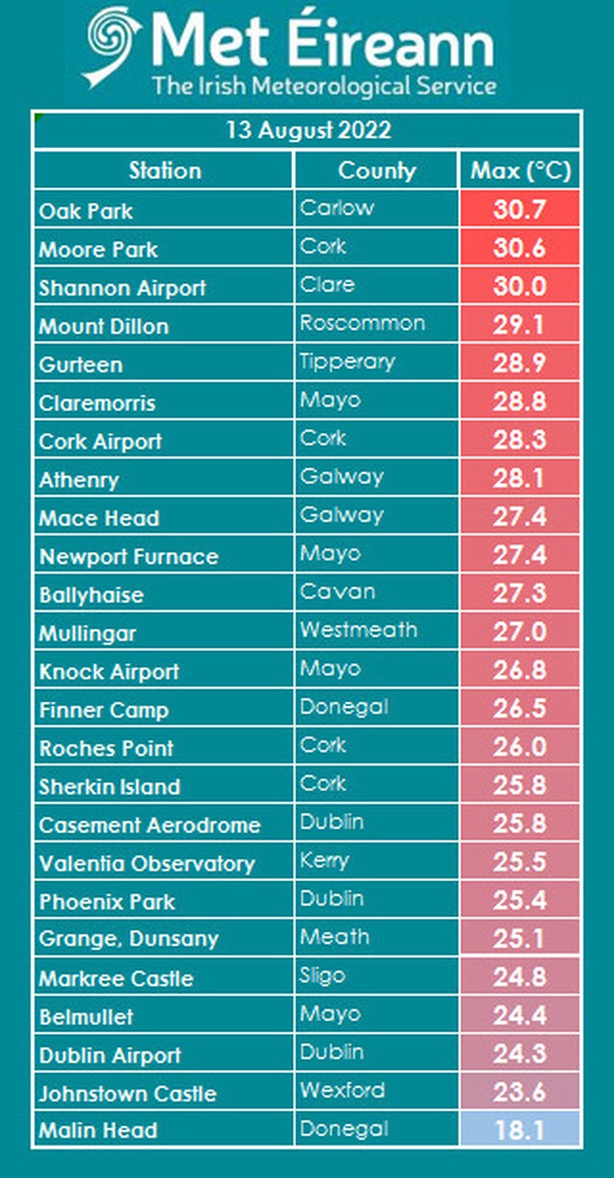 "Today we have got the risk of an isolated shower and if the shower forms it could be a thunderstorm.

"But other than that, dry, hot and sunny, not quite as hot as yesterday."

She also said that it is unlikely that this week’s heatwave will be repeated regularly in the coming summers, although temperatures are likely to spike occasionally

"I don't think it’s going to be the standard Irish summer. I think our climate systems will be as they have always been.

"Lower pressure systems will always bring rain to Ireland. What we might see are more frequent spells like this but we’re not going to suddenly become a continental weather-based system here in Ireland.

"But yes, we can possibly expect more extremes of heat."

Acting Chief Medical Officer Professor Breda Smyth last week warned that those who are vulnerable to the effects of heat need to be extra careful during hot spells.

A thunderstorm warning for Antrim, Armagh, Down, Fermanagh, Tyrone and Derry has been issued by the UK Met Office, with "hit and miss thunderstorms" developing.

The warning will be in effect from 9am until midnight tomorrow.