Hurricane Laura tore off roofs and shredded buildings in the southern US state of Louisiana as it slammed into the coast, killing at least four people, with shaken residents emerging to survey the damage.

Forecasters warned of the continued risk of a storm surge as the hurricane, one of the strongest to ever hit the region, moved inland and weakened rapidly.

He said: "We have learned of four deaths in Louisiana caused by this storm.

"All were related to trees falling on residences which is in line with this being a major wind event."

Most of the windows of the Capitol One Bank Tower skyscraper in the city of Lake Charles were blown out by ferocious gusts that also uprooted trees, power pylons and road signs.

Streets were flooded, debris flew through the air and buildings were submerged by water or destroyed.

More than 700,000 people were without power in Louisiana and neighboring Texas, according to the PowerOutage.us site.

Louisiana Governor John Bel Edwards appealed to residents to stay home, and confirmed that one girl died when a tree fell on her home in the Leesville area of the state.

He also warned of a large chemical plant fire near Lake Charles that was belching black flumes into the air.

The NHC had earlier warned of an "unsurvivable" surge as evacuation orders were issued for hundreds of thousands of Gulf Coast residents.

Thanks to the U. S. Coast Guard for the tour around the area hit by #HurricaneLaura.

It shows us where we need to focus resources.

It said: "Hurricane Laura remains a deadly hurricane with devastating coastal storm surges, destructive winds, and flash flooding," the White House said in a statement, adding President Donald Trump vowed to deploy all necessary resources to help those in need.

Satellite images revealed the immense size of the hurricane as it made landfall as a Category 4 storm at around 6am Irish time near the town of Cameron, close to the border with Texas, packing sustained winds of 240 kilometers an hour.

Laura was expected to dump 10cm to 20cm of rainfall, with some isolated areas of Louisiana receiving 45cm.

By the afternoon, the hurricane had weakened to a Category 1 storm as it moved towards Arkansas.

Texas Governor Greg Abbott had warned Laura's power was "unprecedented" and told citizens to "get out of harm's way."

Mr Abbott said: "Your property can be replaced, your life cannot." 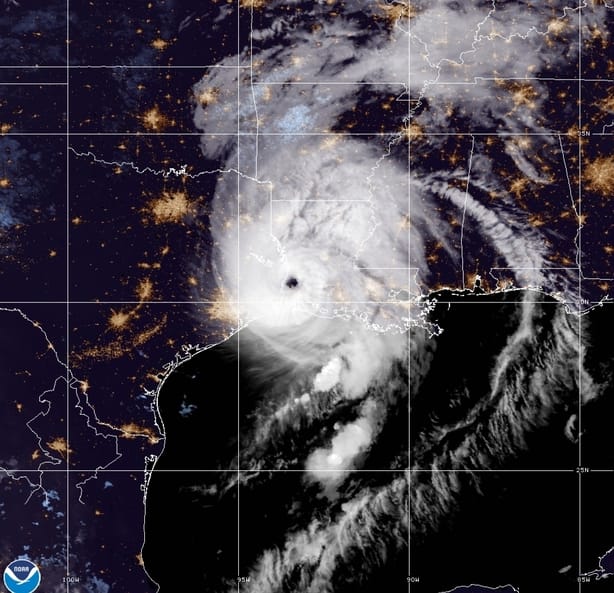 Vice President Mike Pence, speaking on the third night of the Republican Party convention, urged people in the storm's path to "heed state and local authorities."

Coronavirus loomed over the emergency response, with authorities trying to ensure that evacuees use hand sanitizer, get their temperatures taken and maintain a distance of six feet.

The National Guard mobilised more than 1,000 members in Texas, including 20 aircraft personnel and more than 15 shelter teams.

In New Orleans, devastated by Hurricane Katrina in 2005, the historic French Quarter was empty of tourists. Sandbags were piled up in front of the doorways of colonial-style buildings and windows were boarded up with plywood.

The city remains traumatised from Katrina, which made landfall as a Category 3 storm, flooding 80% of the city and killing more than 1,800 people.

The Atlantic storm season, which runs through November, could be one of the busiest ever this year, with the NHC predicting as many as 25 named storms.