People have been rescued from their homes in Newcastle, Co Down after a river burst its banks and left the town looking "like a disaster zone".

High winds and heavy rain have swept across Northern Ireland in the wake of Storm Francis.

A boat was used to help residents in Newcastle, a picturesque east coast town on the edge of the Mourne Mountains.

Up to 300 homes have been affected and streets left under three or four feet of water, a local representative said.

Stormont Assembly member Colin McGrath said: "It is like a disaster zone."

Those living in the Shimna Road area have been battling floodwaters since the river the road is named after overflowed.

Stormont's Infrastructure Department said: "Multi-agency partners are currently on the ground working in partnership responding to the impacts of Storm Francis. 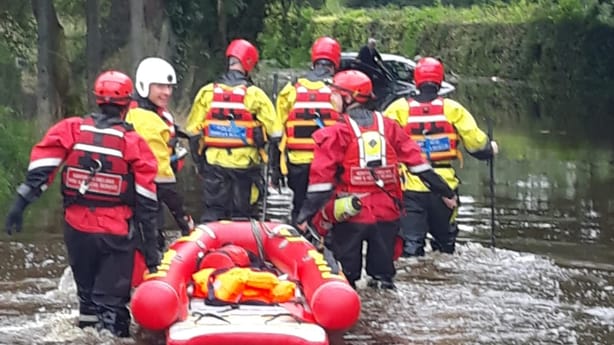 "Due to the heavy rainfall, the Shimna River has burst its banks in places and there are significant reports of flooding in the Newcastle area.

"Staff were on the ground from early morning distributing sandbags and providing assistance to property owners."

Throughout Northern Ireland, the department's teams continued to clear essential infrastructure to reduce the risk of flooding to homes.

It added: "Close monitoring of water levels is ongoing and will continue until the weather warnings have elapsed."

A number of roads have been closed.

Geoff Simmons, from South Down, took his children to creche this morning and had to take a 20-mile detour over the mountains in wild conditions to get home.

He said: "Serious rain overnight in Newcastle, County Down."

A warning for heavy rain and wind remains in place until 6am tomorrow and it is possible this could lead to debris on the road, fallen trees and spray or large waves on coastal routes. 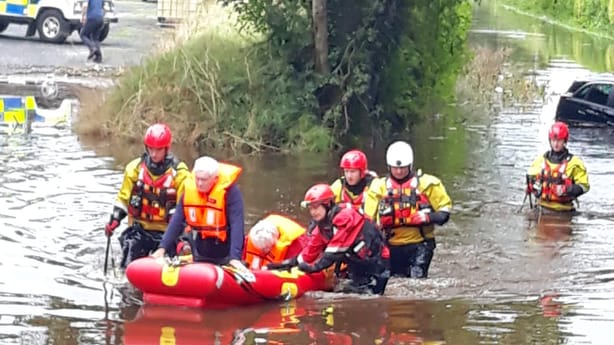 The Northern Ireland Fire and Rescue Service said it was dealing with significant flooding in the Bryansford Avenue area of Newcastle.

"Our specialist rescue team, flood response teams and local crews are in attendance.

"A number of people have been rescued from their homes and the response is ongoing."

Nationalist SDLP Stormont representative Mr McGrath said up to 300 homes in the town had been affected and some streets were under three or four feet of water.

Fire crews also attended a flooding incident in Maghera to help rescue a number of people trapped in their home.

The emergency service said: "We want to reassure the public we are prepared and well-rehearsed in terms of our contingency planning in readiness for the strong possibility of flooding in parts of Northern Ireland across the afternoon and we have redeployed resources accordingly.

"We are working closely with our colleagues in the Police Service of Northern Ireland, Coastguard and other statutory agencies right across Northern Ireland to assist members of the public."

The Fairy Glen River in Rostrevor, near Newry in Co Down, has also burst its banks.

The Infrastructure Department asked the public to consider the need for their journeys, take extra care when travelling and adhere to road signs and temporary traffic control measures.