Met Éireann has said that 80 millimetres (3 inches) of rain was recorded in Co Kerry overnight as Storm Francis brought heavy rain and strong winds, causing flooding in parts of the country.

There was widespread flood damage to properties in Bantry in west Cork.

Roads in the county were described as dangerous, with debris and surface flood water, along with a risk of falling trees.

Up to 50 homes and businesses in Bantry were damaged during a period of prolonged heavy rain between 10pm and 2am. 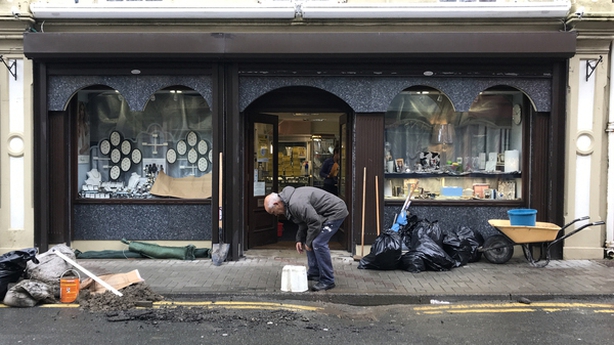 Cork County Council said the local drainage system could not cope, with up to 25mm of rain falling within two hours. 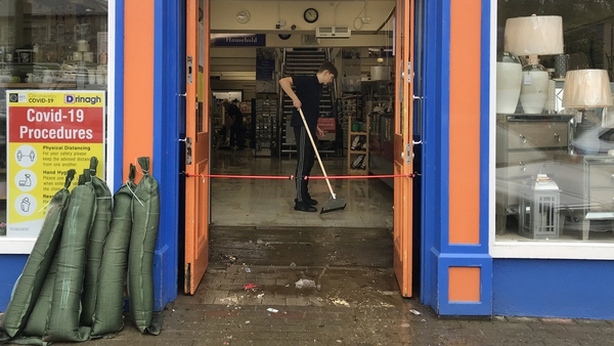 New Street, Main Street, Barrack Street and the Square were the worst affected with council crews and local fire brigade services working until 4am to pump floodwater and place sandbags at properties.

There was also flooding in Bandon, Drimoleague, Dunmanway, Passage West and Youghal, but Skibbereen avoided a repeat of last week's flooding.

The council said it appears the drainage and sewer network in Bandon was overwhelmed by the volume of rainfall.

It said work is continuing to improve the system.

Here's the 24 hour rainfall from 10am Mon to 10am Tues showing much of the rainfall from #StormFrancis
Over 80mm was recorded by one of our volunteer weather observers in Co. Kerry overnight. pic.twitter.com/ohnEZxWZ1D

Met Éireann meteorologist Linda Hughes said it was not unprecedented to have heavy rainfall in August, as conditions are influenced by the hurricane season with tropical conditions and moist air pushing up towards Ireland.

Hundreds of ESB customers are without power, with counties Cork, Limerick, Tipperary and Galway the worst affected.

Further west, Bantry was the worst effected area in the county with over 50 businesses and homes damaged by flash floods. @rtenews pic.twitter.com/iQt1n2wbvB

Call for Bantry works to be speeded up

The Chairman of the Bantry Business Association has said the flood relief work which is under way in the town needs to be expedited.

Diarmuid Murphy, who owns the Fish Kitchen Restaurant in thew town, said plans to fix the road culverts as part of the flood relief scheme as the existing culverts are insufficient.

Speaking on RTÉ's News at One he said: "It's a slow process which needs to be expedited really, because this can't really happen to businesses again. It's been a tough year as it is and this really is a bit of a kick for a lot of businesses".

He said this is an ongoing problem and the council are working on it, but it needs to be fast-tracked.

Mr Murphy said the flooding has been "fairly devastating" for a number of people and a number of businesses will be under pressure.

He said a river of water was flowing down the main street last night and sandbags were washed away.

Some premises have had to have their floors and stock replaced, he added.