Met Éireann has extended a wind warning for the nine counties earlier covered by the Status Orange notice, saying that strong winds are now expected to persist until Monday morning.

Counties Donegal, Leitrim, Sligo, Mayo, Galway, Clare, Limerick, Kerry and Cork which were expected to have the warning lifted at around 10pm tonight will instead experience Status Yellow winds until 3am on Monday.

Met Éireann said that the storm would bring severe and damaging gusts, high waves and a risk of coastal flooding as it continues passing north of Ireland.

Gusts of up to 120km/h have been recorded at Mace Head in Galway and Met Éireann said that the strongest winds will be on exposed hills and coasts.

Gusts of more than 100km/h have also been recorded at Malin Head, Co Donegal, and Belmullet, Co Mayo.

There are currently 3,500 homes, farms and businesses without power as a result of Storm Dennis, which has brought strong winds to many parts of the south and west coasts.

ESB said that at one point this afternoon there were 18,000 premises without electricity.

Gardaí and the Road Safety Authority have urged road users to be extra cautious and to be aware of potential floods and fallen debris.

The storm has caused the River Drowes to burst its banks at the Leitrim/Donegal border. As a result, adjacent fields in the Tullaghan/Bundoran area have been flooded.

A Status Yellow wind warning, which was in operation for the whole country, was withdrawn by Met Éireann this afternoon.

The strong winds have affected transport services in the northwest, with the cancellation of the morning flight from Donegal to Dublin.

Ferry services to and from Árainn Mhór are expected to be curtailed or cancelled. There will be no ferry service to or from Tóraigh.

Ferry services to and from Clare Island in Co Mayo have also been cancelled.

A number of homes in east Galway are also without power following a lightning strike. ESB crews are working nationwide to restore electricity.

The Irish Coast Guard appealed for people to stay away from exposed beaches, cliffs and piers.

The storm has led to the cancellation of the Galway v Tipperary and Limerick v Waterford games in the Allianz Hurling League.

Elsewhere, Storm Dennis lashed parts of the UK with more than a month's worth of rain in 48 hours and winds of more than 140km/h.

Roads and railways were flooded this morning after torrential downpours and high winds caused by the second storm in just over a week.

In south Wales, where the situation was said to be "life-threatening", South Wales Police declared a major incident as firefighters and rescue crews continued to help communities who have been cut off due to the flood water.

The force have told people in affected areas to stay indoors unless a journey was necessary, avoid waterways, and monitor local and social media for updates.

One of the worst-hit areas in South Wales was the village of Nantgarw, Rhondda Cynon Taff, near Cardiff, which had seen entire streets left underwater since the early hours of Sunday morning. 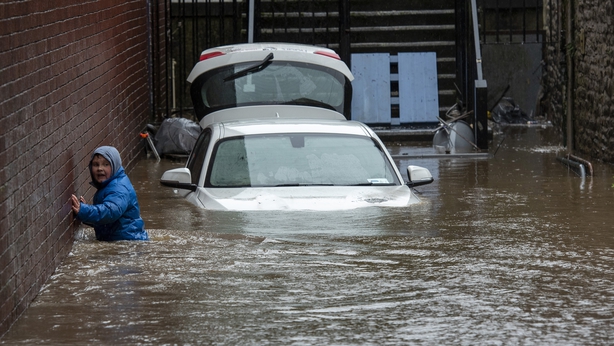 Earlier, the UK Met Office issued a red warning for the region due to heavy rainfall and flooding risk which remained in effect until 11am.

The Met Office added that winds of more than 120km/h were recorded across parts of the country, with the highest measuring 145km/h in Aberdaron in north Wales.

A total of 156.2mm of rain fell at Crai Reservoir in Powys in the 48 hours from Friday to Sunday morning, it added.

The average monthly rainfall for February in Wales is 111.1mm, the Met Office added.

Severe flood warnings have been issued for the rivers Neath and Taff in South Wales, as well as the River Teme further north.

Rescue workers were using boats to get families to safety after further flooding in nearby Nantgarw.

Gwent Police said that residents of Skenfrith, Monmouthshire, were being advised to evacuate due to the flooding.

Relief from Storm Dennis is still some distance away, the Met Office said, adding that "heavy rain and strong winds" would continue across large parts of the UK today.

"South Wales will see a lot of rain fall before Dennis moves north later to Scotland and Northern Ireland."

Meanwhile, footage has emerged of an A380 plane trying to land in strong winds at Heathrow Airport yesterday.

The Etihad Airlines plane struggled to line up with the runway as it was buffeted by strong crosswinds.