A Status Yellow snow and ice warning for the entire country is in place until 10am tomorrow morning.

After a day of snow showers, Met Éireann is warning of further scattered wintry showers overnight and early tomorrow.

The forecaster said there may be some snowfall accumulations, especially in the west and north.

Met Éireann also warned that some disruption to travel is possible, particularly over higher routes.

There is a risk of further isolated thunderstorms too, mainly in the northwest overnight.

Aside from the snow showers, frost and ice will form later and it will stay bitterly cold with lowest temperatures of minus 1 to plus 2 degrees.

Tomorrow morning is due to start dry and bright in many areas with spells of sunshine.

However, some wintry showers will occur early on, becoming mainly confined to the northwest by late morning. Later in the day rain will move into the southwest.

It will be another cold day with highest temperatures of only four to eight degrees.

There is also a Status Yellow marine wind warning in place with westerly winds reaching gale or strong gale force for a time tonight on all coastal waters and on the Irish Sea.

AA Roadwatch has urged all road users to take caution.

"Road conditions can change quite quickly in hail or snowfall. In any affected areas, it will take much longer to stop a vehicle, so slow down and avoid any harsh acceleration or braking."

A Status Yellow wind warning that had been in place for Donegal, Galway, Leitrim, Mayo, Sligo, Clare and Kerry ended at 8pm this evening.

However, a number of homes and businesses are without power around the country and ESB Networks crews are working to restore electricity as soon as possible.

Sligo County Council staff were working in Strandhill to clear rocks and stones thrown up by powerful waves early this morning in the wake of Storm Ciara. 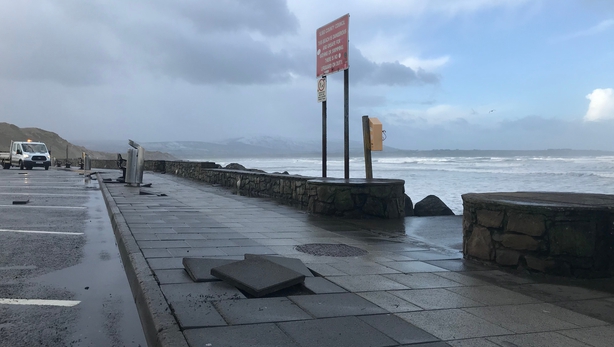 The waves crashed over the sea wall and promenade from about 6.30am to 7am bringing hundreds of stones with them.

The main road leading to the seafront was closed while the clean-up was carried out.

The water went as far as The Strand Bar and into the caravan park at the rear and paving stones on the prom were also damaged by the waves.