Storm Atiyah has made landfall in Ireland bringing high winds and rough seas as it tracks eastwards across the country.

ESB Networks said its crews are dealing with several power outages with the southwest worst affected.

Earlier today, Met Éireann had issued a Status Red wind warning for Kerry with gusts over 130km/h forecast. The warning was in effect from 4pm until 7pm.

The storm is due to move eastwards across the country through the night.

Kerry County Council reported a number of incidents following the red alert for the county.

The council said a tree is reported to have fallen on a car near Mountcoal Cross on the N69 while council crews in An Daingean removed a shed which blew onto a road.

Council crews in Dingle have removed this shed which blew onto the road near Murrioch and the road is fully open.#StormAtiyah pic.twitter.com/bXNzpjzd8F

Met Éireann said there is a possibility of coastal flooding due to a combination of high seas and a storm surge.

Winds will reach speeds of 80km/h for a time this evening. Gusts of up to 130km/h are possible on higher, exposed ground.

A Status Red Marine warning was also in place earlier today but it has since been downgraded to a Status Orange gale warning.

It said winds will reach gale force 8 to storm force 10 this evening and tonight on all Irish coastal waters and on the Irish Sea.

A Status Orange wind warning is in effect for counties Donegal, Galway, Leitrim, Mayo, Sligo, Clare, Cork, Kerry and Limerick, until 6am tomorrow.

A Status Yellow wind warning is in place for Leinster, Cavan, Monaghan, Roscommon, Tipperary and Waterford, until 6am tomorrow.

Seven other parks in the west of the country were also closed while the weather warnings remain in place.

Motorists have been asked to exercise extra caution if driving in affected areas.

Dublin Zoo cancelled its Wild Lights event for this evening. The Zoo said it made the decision in the interest of the health and safety of visitors, staff and the animals.

Balbriggan Christmas Market at Bremore Castle in Dublin has also been cancelled due to high winds, which have caused some damage to the marquees. 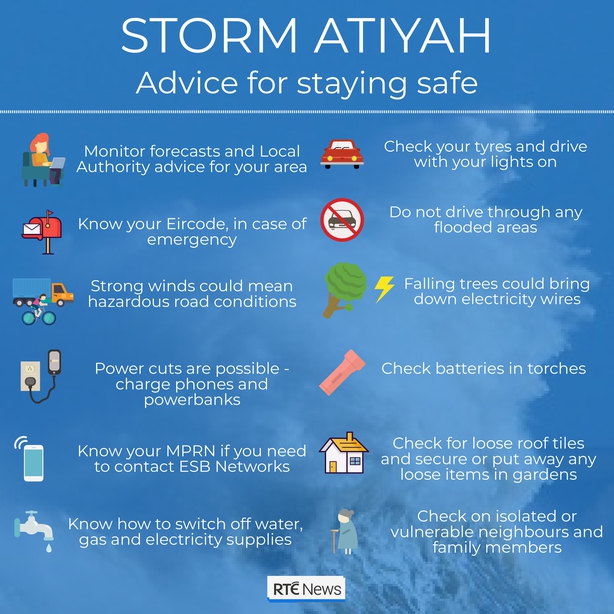 The Strandhill People's Market has been cancelled for the first time in five years due to Storm Atiyah.

Organisers say they made the decision in the interests of the safety of the public and the stallholders who travel from all over for the market, which is held in the hangar at Sligo Airport every Sunday.

Please note Dursey Cable Car is no longer operating due to gusts exceeding safety limits. #StormAtiyah Cable car operations will be suspended tomorrow (Monday) and are scheduled to recommence following an inspection on Tuesday morning. pic.twitter.com/M0mln62hPb

A flood barrier was put in place at the Spanish Arch in Galway city earlier today.

Galway City Council advised motorists and pedestrians to exercise caution while commuting tomorrow morning in case of debris that may fall on roads overnight.