The full force of Storm Lorenzo is being felt along the west and south west coasts tonight with high winds, torrential rain and heavy seas.

Met Éireann has said the system will be at its most intense in the early hours of the morning, before turning inland and weakening.

A more prolonged period of heavy rain is forecast in north western areas early in the morning.

Met Éireann's Gerry Murphy said there may be wind gusts of up to 130km/hr overnight.

An Orange weather warning for five western counties - Kerry, Limerick, Clare, Galway and Mayo - is in force until 6am.

The storm has slowed somewhat, which has taken some of the ferocity out of the system, according to Minister for Housing, Planning and Local Government Eoghan Murphy.

Speaking on RTÉ's Prime Time, he said there have been no major incidents.

The storm has brought down a small number of trees down in Munster and there are some power outages in Mayo and Sligo, but they are "on the low side", according to Mr Murphy.

He said there has been minor flooding in Galway, but it appears that flood defences are holding.

The National Emergency Coordination Centre has reiterated serious concern about the impact of Storm Lorenzo, particularly in coastal areas along the west and southwest coast.

Its advice is still for people to stay away from the coast for the duration of the storm, which is expected to have dissipated by dawn.

Gardaí have asked drivers to slow down and for drivers of high-sided vehicles and overnight couriers to take particular care.

Earlier, a spokesperson for the Irish Coast Guard appealed to the public to exercise caution during Storm Lorenzo.

Gerard O'Flynn said people should not do "any silly stuff" like trying to get a fancy photograph or go into areas that can be exposed to a sudden gust of wind or wave.

Mr O'Flynn added it is not a time for any leisure activity and people should not unnecessarily expose themselves to danger.

He said there are three coastguard coordination centres staffed 24/7 and the coastguard has a network of units around the country providing services such as shoreline services, cliff rescue and rescue boats.

#StormLorenzo – A Status Orange wind warning is in place for counties Galway, Mayo, Clare, Kerry and Limerick until 6am tomorrow morning. Met Éireann has warned that storm surges will produce coastal flooding and damage. | https://t.co/Cww6F1VidX pic.twitter.com/DwlfaUIGZu

Lorenzo - the ex hurricane and now extra-tropical storm - is hitting Ireland at a time when the ground is already saturated, trees are still in full leaf, and rivers are already swollen after heavy rain.

Minister Murphy warned of unpredictable consequences and appealed for people to stay back from the coast, stay in high areas, and stay dry. 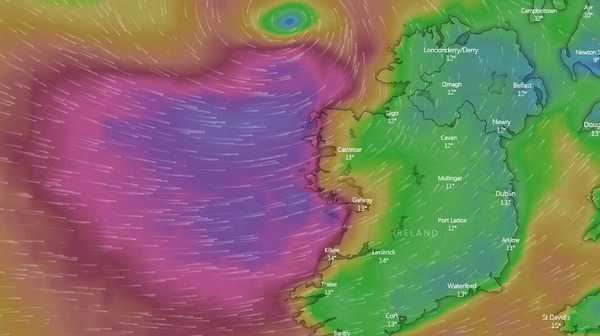