Ali will be the first storm to blow in across Ireland and the UK this winter, the new list of names for this year's strongest weather systems shows.

Also on the list of storm names for 2018/2019 announced by Met Éireann and the UK's Met Office are Bronagh, Callum and Deirdre, while a particularly stormy winter could see storms Saoirse, Tristan, Violet and Wyn batter Ireland and the UK. 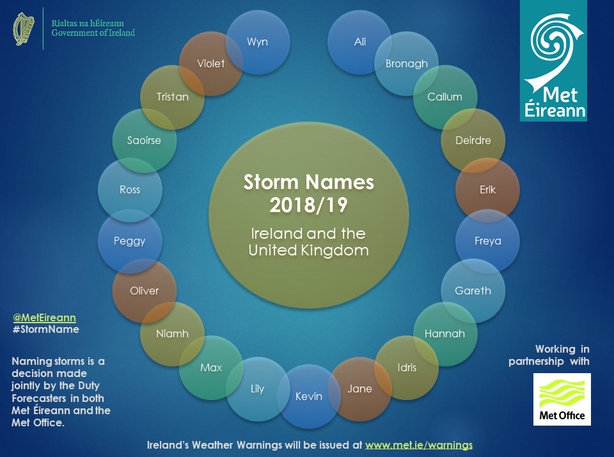 It is the fourth year that Met Éireann and the Met Office have run the Name our Storms scheme, which aims to raise awareness of severe weather before it hits.

The season's names have been compiled from a list of submissions by the public, choosing some of the most popular names and also selecting those which reflect the nations, culture and diversity of Ireland and the UK.

This year the first storm gets a male name, Ali, followed by an alternating pattern of female and male names, which was established by the US National Hurricane Centre in the 1970s.

The alphabetical list of names skips Q, U, X, Y and Z to comply with international storm-naming conventions.

The 2017-2018 season kicked off with Storm Aileen, the first of ten severe weather events to be named in the past year, and ended with Hector earlier this summer.

Evelyn Cusack, head of forecasting at Met Éireann, said: "The last 12 months have seen some extreme weather around the globe as well as here at home.

"While it is too early to say whether the coming winter will be a stormy one or a quiet one we are prepared with a whole new set of 21 names for whatever nature may throw at us.

"As before, Met Éireann forecasters will work in close co-operation with our colleagues from the Met Office in the UK to keep all the peoples of these islands warned of impending severe weather."

Bronagh, Niamh and Saoirse are on the list but what are the other storm names for the coming season? #StormName pic.twitter.com/TT656Cv3FE

Derrick Ryall, head of public weather services at the Met Office, said: "Naming storms has been proved to raise awareness of severe weather in the UK, providing a consistent message to the public and crucially prompting people to take action to prevent harm to themselves or to their property."

Polling has found almost 80% of people think giving storms a name was useful in making them aware the severe weather may have more impact than normal, while 63% believe it is useful in letting them know to take action.