The warning is for the storm surge following Storm Eleanor which has cleared from Ireland and is moving across the North Sea.

Met Éireann has said that damaging inland gusts are likely. The weather warning is valid until 2pm today.

Motorists are advised to remain vigilant to the possibility of flooding and debris during the day.

A Status Yellow wind warning is in operation for Leinster, Cavan, Monaghan, Roscommon, Tipperary and Waterford. Met Éireann says that gusty westerly winds are expected to continue into this afternoon.

Around 55,000 ESB customers in the west and north west of the country are without power due to Storm Eleanor.

The counties worst affected by the power outage are Mayo, Leitrim, Sligo, Galway, Cavan and Monaghan.

Earlier, Status Orange weather warnings were issued and road users were urged to travel with care as the storm swept across the country bringing gusts of up to 130km/h and flooding in some areas.

In a statement, the ESB said that fallen trees on overhead power lines are responsible for most of the damage to the power network.

It said that its teams are working to restore electricity in the affected areas where it is safe to do so, and that teams will be deployed again before dawn this morning.

The ESB also said: "Further damage to the electricity network can be expected in North Leinster as the storm tracks east."

Dominick Street, Cladagh Quay, Flood Street Quay Street and roads around the docks were all submerged in a matter of minutes, when high winds drove tides ashore before 6pm.

The city fire station was flooded and several businesses and homes in the west of the city are dealing with excess water.

Strong winds pushed water from the River Corrib over a specially erected flood prevention boom, close to the Spanish Arch.

A number of roads have reopened and a clean up operation has begun.

The Road Safety Authority said motorists and pedestrians should be aware of falling debris and warned that high-sided vehicles and motorcyclists were particularly vulnerable to strong winds.

A Status Orange warning for Munster, Leinster and Galway was in place until 10pm as the fast-moving storm tracks across the country with southwest to west winds of up to 80km/h and gusts of between 110 and 130km/h possible.

However, local winds could exceed those forecast with a gust of 140km/h measured at Mace Head.

A number of cars were swept away by flash floods in Oranmore, Co Galway last evening.

Gardaí said a section of the Coast Road between Oranmore and Galway was impassable and that there were significant volumes of water on roads around Renville Park and on the Maree Road at Oran Hill.

A number of people were evacuated from cars at a roundabout into a shopping centre in Oranmore village after swells submerged the road just before 6pm.

The Shannon based Coast Guard Rescue Helicopter was tasked to attend the scene but was stood down after all those involved escaped unharmed.

Salthill Promenade was under water after winds combined with high tides to cause flooding.

Gardaí said the situation improved as the tide abated. Several cars were submerged in Toft car park, on Seapoint Promenade.

Shannon Airport has told passengers to check their flight status during the warning period.

?? Attention Passengers??
A status orange wind warning will be in place across the airport region from 16.00 today. Please check your flight status with your airline before making your way to the airport during this period. Thank you. pic.twitter.com/MIpCV9CzAU

Sligo County Council has said that strong winds have resulted in fallen trees throughout the county, with a number of roads blocked.

The council said that water levels are also rising very quickly, warning that low lying and coastal roads are in particular danger.

Meanwhile dozens of local roads are closed in the midlands because of fallen trees.

Storm Eleanor has hit parts of Roscommon, Longford and Offaly with reports of trees down in Castlerea, Ballaghaderreen, Birr and nearby areas.

There are no reports of any injuries and efforts are under way to clear debris from roads in many areas.

A Status Yellow rainfall warning was also issued for Connacht and Donegal from 2pm to 9pm, with thundery downpours forecast and accumulations of up to 25mm in some areas.

Floodwaters in Cork city along the south channel of the River Lee have subsided.

The combination of a high tide just before 6pm and very high winds as the storm crossed over the county led to localised flooding along Fr Mathew Quay, Morrison's Island, Union Quay and South Terrace. A number of cars were temporarily stranded.

Gardaí say the flooding caused disruption to evening traffic in Bantry, but no houses or businesses were affected.

There was also some flooding along the Bailick Road in Midleton, Co Cork.

While in Clonakilty, high tide passed without incident according to local gardaí.

In Kerry, there were also reports of flooding.

The N86 Tralee to Dingle Road was impassable at Blennerville due to flooding but has re-opened.

There was flooding at high tide along Limerick city quaysides this evening, as Storm Eleanor brought high winds and heavy rain.

The worst affected areas were O'Callaghan Strand, Merchants Quay and Georges quay. Many were closed for a time. 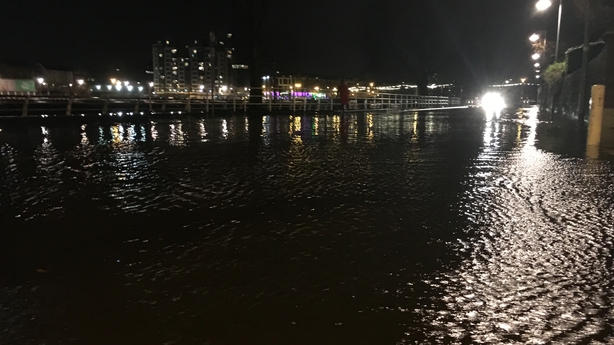 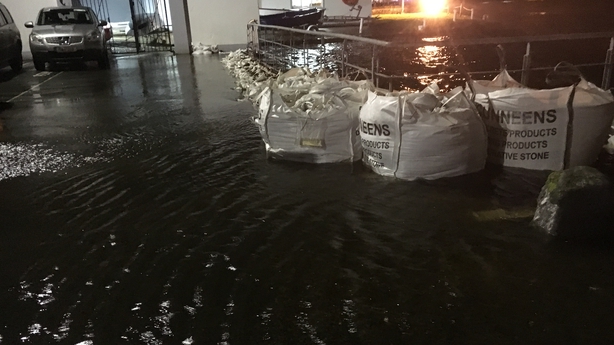 Sandbags were placed in areas around the city courthouse, which are vulnerable to flooding.

Flood defences were also placed in vulnerable areas in Foynes and Askeaton in Co Limerick.

Senior Engineer Tom Tiernan said: "We are advising the public not to venture out unless necessary - particularly in coastal areas. Motorists are asked to be careful when driving and to avoid parking vehicles in close proximity to exposed coastal areas.

"Any coastal areas which have previously flooded are at risk and people in such situations are advised to take appropriate precautions."