The farmers' protests outside Lidl supermarkets in counties Cavan and Monaghan have ended.

Officials from the IFA will meet senior Lidl management next week.

The farmers gathered yesterday morning in protest over a cut-price promotion on large chickens. The protest continued overnight.

Poultry farmers say they have heard nothing since a similar protest at the end of last year. They say the current prices for both eggs and chickens are unsustainable.

"Farmers feel they’re not getting fair play at retail level," said farmer Thomas Fitzsimons, who was among those gathered at the protest. 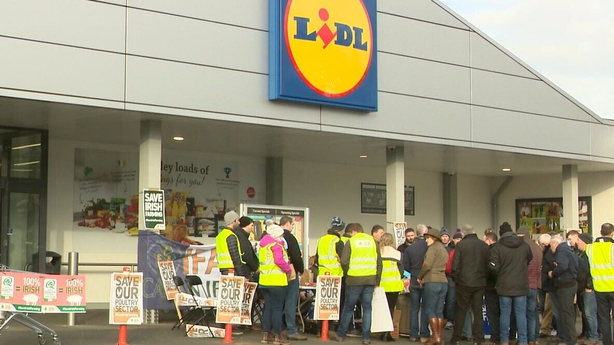 "All we are looking for is an extra 2 cent per egg and 15 cent a chicken and consumers have no problem with that," he added.

Sarah Hanley, who is on the IFA Policy Executive for Pig and Poultry producers, said farmers simply want their margins restored.

"We must have our margins restored and we can’t continue to produce unless that is achieved," she said.

Chairman of Cavan IFA Elizabeth Ormiston said 6,000 people are employed in this sector and it needs to be supported.

"I’m here to support the poultry producers in this county. They’re here and they’re only trying to make a living. This thing of trying and selling food below the cost of production, it won’t survive," she said. 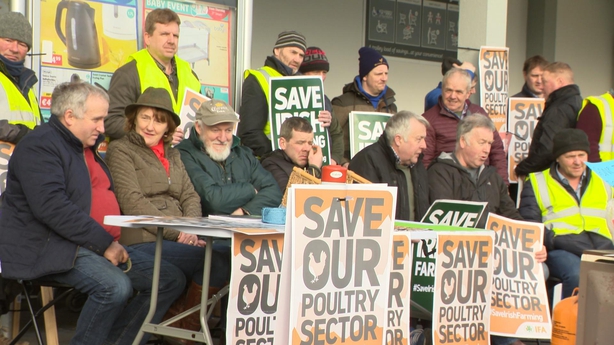 Irish Farmers Association Poultry Chairman Andy Boylan said the move by Lidl "is the kind of kamikaze behaviour by retailers that has to be outlawed".

The Vice Chairman of the Poultry Committee, Brendan Soden, said feed costs have increased by 36% on last year, which is completely unsustainable.

In a statement to RTÉ News, Lidl said it bears the costs of all promotional items and the supplier receives the contracted price.

"Like all retailers Lidl operates weekly promotional specials under our 'Super Savers' range. Lidl bears the costs of all promotional items and the supplier receives the contracted price."