Marking a year since he vanished, Fungie the Dingle dolphin was remembered in west Kerry today, where a series of events was held to celebrate the famous bottlenose dolphin's contribution to the community.

Throughout the day boatmen brought people on free trips to see Fungie’s old stomping ground at the mouth of the harbour and colourful stories of the community's relationship with the dolphin were recounted.

A large mural of the dolphin was also unveiled at the iconic lighthouse.

Live music and song on the pier celebrated Fungie’s legacy, while local children displayed artworks inspired by the playful dolphin.

Dingle boatman Jimmy Flannery, one of the organisers of today’s event, said the people of the town wished to show its appreciation for Fungie in a "low-key and appropriate manner".

"Fungie has given this town so much. Obviously, there’s the economic side of it, all the jobs he created, the way he put Dingle on the map. But there’s a very deep and genuine connection between the local community here and the dolphin. 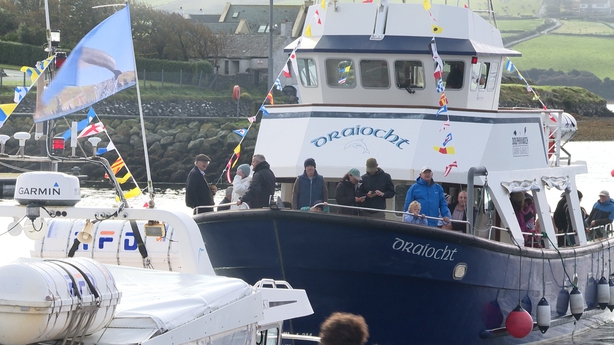 "Fungie brought us so much happiness over so many years and we just wanted to say thank you in a small way, to remember him."

The playful bottlenose dolphin spent 37 years at the mouth of Dingle harbour and helped establish Dingle as a major tourist destination.

Last October, the dolphin suddenly disappeared and despite an extensive search there have been no further sightings of the dolphin since.

For almost four decades Fungie excited and enthralled thousands of visitors every summer.

Paddy Ferriter, the old lighthouse keeper was the first to spot the dolphin at the mouth of the harbour in 1983.

A mural featuring Fungie in full flight was unveiled on the gable of the lighthouse this morning.

Artist Ciara McKenna, who created the mural said the location was "perfect and poignant".

"Paddy Ferriter, the lighthouse keeper was the first to see Fungie and the lighthouse overlooks where he played, so you couldn’t find a more appropriate place really," she said. 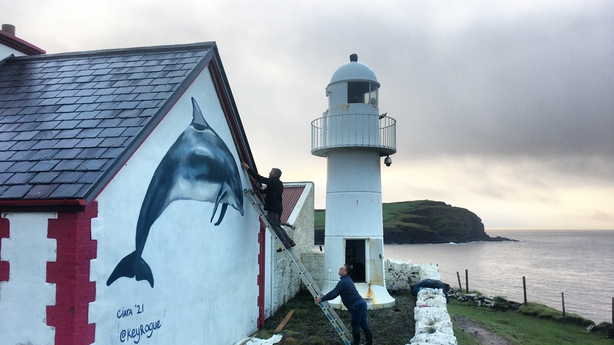 "I grew up looking at Fungie in the harbour. He brought so much magic and joy to our lives and also to the lives all the visitors who came to experience him. He was special," Ciara added.

"It’s a bit lonesome now that Fungie has left, but you can still feel his spirit here at the mouth of the harbour. You can feel his spirit in the hearts of the local people also I think."

Up to 12 boats, employing over 50 people operated daily trips to see Fungie, while restaurants, hotels and guesthouses and gift shops also benefitted from the massive spin-off.

Caroline Boland of Dingle Peninsula Tourism said that Fungie was a huge loss to the town, but that the tourism industry on the peninsula remained on a strong footing.

"The boatmen have adapted and diversified and are now focusing on eco-tours and fishing trips. The community here is resilient. Up to 95% of the boats have continued to operate and there was huge demand for trips throughout the summer."

Donations were made to Mallow Search and Rescue and the Dingle Coastguard.