A small community in west Kerry has rolled backed the years ahead of 'rolling the oats' by organising a novel threshing event.

Hundreds came to the Griffin farm in Lios Póil to witness the harvesting and threshing of a field of oats. It’s over 50 years since a crop of oats was last saved in the area using traditional methods.

The oats were sown by the Griffins in Minard as part of a fundraising initiative in aid of the West Kerry Community Hospital.

The two-acre field was harvested using an old reaper and binder and a huge community effort followed. The sheaves of oats were tied and stacked by hand and piled in to larger stooks.

Brendan Ferris then arrived with his 1935 Ransome thresher to separate the oats from the chaff and the straw, while a meitheal of men fed the machine. 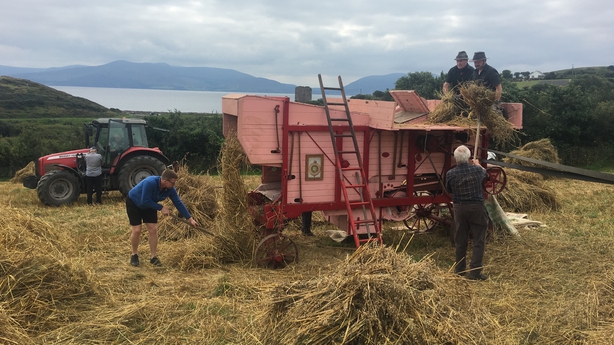 Farmer Matthew Griffin said the idea "sprouted during lockdown" and that he decided to set the oats on Easter Sunday last.

"It was lovely to see the field under oats again. I’d say the late 1960s was the last time we sat oats here," he said.

Mr Griffin said the introduction of silage during the 60s and early 70s brought an effective end to grain-growing on the peninsula.

88-year-old Séamus Ó Dubháin said he remembers harvesting oats with a scythe and the excitement that followed the arrival of the threshing machine.

"It was a big day of work that needed a big gathering of men for the meitheal," he said. "Everyone was willing to help and there was great neighbourliness. The men worked hard but there was plenty grub and porter.

"But the more the porter went down the smaller the meitheal got, with fellas making off the house to sing songs and tell stories. In the end you’d see the poor thresher left rattling away on its own in the middle of the field and all the men missing, enjoying the porter. Great craic."

11-year-old Tommy Ó Deargáin was amongst the many local children that came to see the thresher in action.

"It’s my first time seeing all this. It was fierce interesting to see the reaper and binder and today the thresher is here to separate the grain from the straw. Nothing is wasted. The straw will be used as bedding for the cows during the winter."

"Given the lockdowns and restrictions we’ve had to come through it’s lovely to see our community coming together again. All generations are here and it’s quite magical to see it. The old folk are reliving their youth and the children are fascinated by the whole thing. You can feel the spirit of the people here." 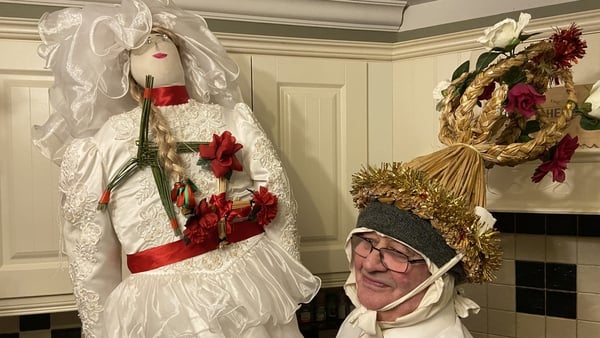