Ulster Unionist Party leader Doug Beattie has defended his attendance at an illegal protest against the Northern Ireland Protocol in Co Armagh.

The Upper Bann MLA said he turned up at the event on Saturday to observe and listen, and said he was standing well back from the parade.

Loyalists gathered in Portadown town centre on Saturday in demonstration over the controversial protocol and what organisers said is "two-tier policing".

A number of bands took part in the rally and a few speakers also addressed the crowd.

A number of people leading the march were wearing balaclavas and many held anti-protocol signs and placards while others waved Union flags.

Police officers held a sign informing protesters they were taking part in an illegal protest and that they are liable to arrest.

Mr Beattie told the BBC Nolan Show that he was there because the protest was in the constituency he represents and where he has an office.

He said: "I think it's important that as an MLA for a constituency and a town where my office is, that when I am told there is an unnotified demonstration taking place that I am there to represent the people because the shops were open, we had shoppers about, we had people who were passing by and I felt I needed to be there.

"I was not part of the parade, I stood well back from the gathering which was there at the demonstration and I listened to what was being said from the podium. I think that's also very important to listen to what people have to say.

Mr Beattie said that he faced abuse from demonstrators. 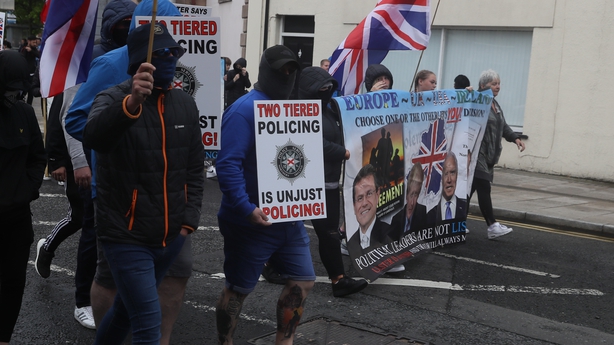 "If people think that I was there having a great time they just need to stand beside me and listen to some of the abuse I had to take when I was in that town, so it was no nice day out for me.

"I talked to the police while I was there, to get a sense of what had happened. I don't know what people want from a politician when he is in his own home town, where his constituency office is and he is notified of something that is going on and he feels he needs to be there to make sure that he represents the people of the town.

Mr Beattie said he would not condemn those who turned up to watch the demonstration.

"For the organisers of the event, I wish that they would engage with the police and make sure they do this in the manner that they should and that they adhere to Covid regulations."

Mr Beattie said reports of masked men wearing balaclavas were "sinister" but added he did not see them at the protest.

The organisers had not applied to the Parades Commission for permission to hold the protest.

Under current Covid-19 guidelines, gatherings in Northern Ireland are limited to 500 people outside.

The protest, which lasted around 45 minutes, passed off peacefully.

A new raft of checks on goods at the ports of Belfast and Larne under the terms of the protocol have sparked anger among unionists and loyalists who feel Northern Ireland is being separated from the rest of the UK.

Sinn Féin MLA John O'Dowd has called on the PSNI to investigate the alleged breaches of parade legislation at Saturday's event.