Rathlin Island off the coast of Northern Ireland is gradually reopening for the summer season after staying Covid-free for the duration of the pandemic.

Residents on the island closed down on St Patrick's Day and did not reopen for visitors last summer.

Some businesses opened temporarily for locals last July, before further lockdowns were introduced in October.

The community made the decision to close the island to visitors after considering the difficulties in hospital access if a resident became seriously unwell if Covid was imported to the island.

While the island was in shutdown, the Rathlin Island Ferry became a vital supply link for the 150 residents between the island and Ballycastle on the mainland.

Mary O'Driscoll, owner-operator of Rathlin Island Ferry, said a decision was taken in March 2020 among the residents and the Rathlin Development and Community Association that closing the island would be the safest way to prevent Covid spreading.

She said: "Particularly around that Easter, people thought we had gone overboard with masks and visors as well because at that time we were told about our eyes and that the infection could get into your eyes, and of course the sanitising.

"And really by the time Easter came everybody was doing it, so I think the fact that the development committee and ourselves worked together and began to realise how serious it was going to be, was probably what put everything in place."

Ms O’Driscoll said their main priority was to keep their crew safe and deliver essential goods and services to the island while keeping Covid-19 out.

She said: "The crew actually never left the vessel. So, when they came to Ballycastle they just unloaded, but they remained on board and all deliveries were brought to the slipway, and then put into a van and put on board again.

"Every single thing from the chemists, the groceries, absolutely everything had to come with us. There was minimum interlinking between the crew, and anybody else, and so the island, in effect, it's just closed down."

Ferry skipper Douglas Cecil believes being able to close off the island and the community sticking together is what kept coronavirus off the island.

"Most people view islands as being remote, but the remoteness has actually turned out to be a strength. But the backbone would have to be the community resilience, getting them through this is something that every islanders should be justifiably proud of," he said.

The island pub McCuaig’s shut down early last year to reduce the risk of importing Covid. It opened for a few months, with restrictions, for locals only last summer.

Catriona Blaney runs the pub, as well as the post office and souvenir shop.

"We actually had a staff meeting planned for Monday 16 March, just to talk about plans for St Patrick’s Day and our longer term plans for summer season last year," she said.

"And on that day, the 16 March, we decided we would close the bar that night because we knew things weren’t good regarding the Covid situation, it was getting very close.

"So we locked down a week or ten days before the mainland. It was the best decision that we made because we knew there were people expected to come over the following day for St Patrick’s Day and we just didn’t want to take the chance."

Ms Blaney said the pub is like a community hub, and locals have missed being together, especially during the long winter lockdown.

They reopened with outdoor table service for locals on 30 April.

She said: "The weather was beautiful, it was a bank holiday weekend. The first people that we had, which we were really glad about, were some of our locals who had waited four months for a pint.

It was a nice way for us as well, the staff, just to ease in again with people that we knew, because we were a little bit rusty for not having worked for quite a few months.

"What we do on a Friday evening, and we did it sort of through lockdown, is we do a chippy tea, for locals only, strictly takeaway only up until now, so by the Friday evening locals had filled up six or eight tables and they were able to sit and eat outside in our area, and it was lovely."

Later this week, the RSPB Rathlin West Light Seabird Centre is reopening to the public.

Liam McFaull, the RSPB Rathlin Island warden said that unlike the human residents on the island, the birds carried on as normal.

"I mean the birds weren't affected like the rest of us were," he said.

"It was pretty unusual, you know, having that whole summer season, not having any visitors across to the island at all but of course it kept us all safe and that’s the main thing."

Now, the reopening of the centre coincides with a special attraction on the island, which is also home to the largest seabird colony in Northern Ireland

Mr McFaull said: "One species that we have been working very hard to try and bring back is the Corncrake.

"This year, the first time, 40 plus years we've got four male birds in the hay meadows, on the island, and that's the only place in Northern Ireland that you’ll find the Corncrakes at the minute."

Despite some residual concerns about Covid-19, the vaccines have brought more positivity and residents are looking forward to reopening the island to visitors.

Ms O’Driscoll said they have been incredibly lucky but will continue to take precautions against the virus.

"I do think it was the cooperation and maybe the understanding, early on that helped us. The potential for letting Covid-19 in would have been lethal and it would have just ripped through the place.

"I think we're going to tread cautiously as we come out of this, we certainly don't want to go back there again so I think it'll give visitors confidence that everything is correct, and safe, and a good place to come." 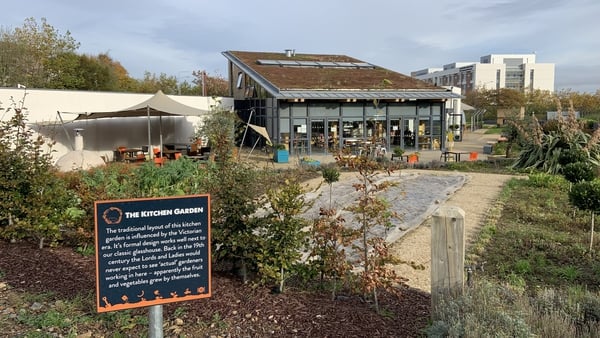