Protests have taken place in Co Donegal and Co Mayo over what demonstrators say are deficiencies in the Government redress scheme for people affected by defective building blocks.

In Buncrana, Co Donegal, up to 2,000 people attended a demonstration protesting the redress scheme for homeowners affected by mica in building blocks.

The bulk of the affected houses are in the Inishowen peninsula but there are houses across the county and come in County Mayo which have also been affected.

Internal and external walls have been cracking and breaking down due to defective blocks that contain high levels of mica.

The organisers of today's protest in Buncrana say that the scheme is worthless in comparison to the scheme for pyrite introduced in Leinster several years ago.

In 2020, the Government made €20 million available under the Defective Concrete Blocks Grant Scheme for homeowners affected by pyrite in Mayo and Mica in Donegal.

The scheme is available through the local authorities to assist homeowners to carry out remedial works, to their principal private residence, where the house is deemed to have been damaged, due to defective concrete blocks.

Under the scheme, the local authority provides 90% of the cost and the homeowners cover the remaining 10%.

However, Eileen Doherty from the Mica Action Group in Donegal told the crowd that the scheme is costing €5,000-7,000 even to access, whereas it only cost Leinster homeowners €500.

She said that Donegal people are being treated as second-class citizens.

She asked Taoiseach Micheál Martin to come to Donegal and see the problem himself, and accused him of being the only representative not to have visited in relation to the issue.

Paddy Diver, whose home in Carndonagh is affected, asked local Fianna Fáil TD Charlie McConaloge to "help your neighbour and to leave a legacy".

Ann Owens, of the organising committee, told the crowd that this was just the start of a long campaign of protests and that it would be brought to Dublin if their demands were not met.

She also told of the support they had received from the county diaspora abroad.

A poem about mica was read by Charlotte Farren, whose father Paddy, a long-time campaigner on the mica issue, died in 2019. The crowd also got a rendition of a new version of the famous ballad The Homes of Donegal.

The crowd, which swelled from 1,000 to nearly 2,000 people, then marched through Buncrana’s main street.

The organisers had asked the protesters to comply with all Covid-19 regulations, and many of those attending wore masks.

Several hundred people marched in a related demonstration in Letterkenny too. 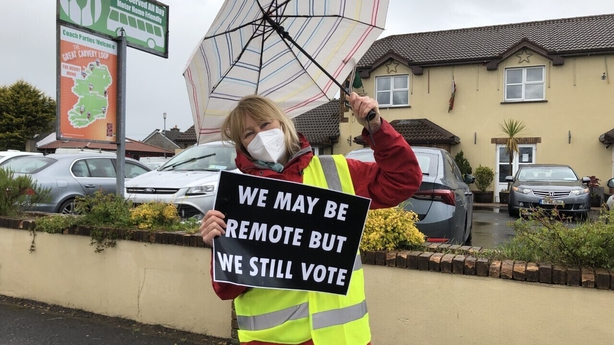 Meanwhile, people whose homes have been affected by defective concrete blocks in the Ballina area of Co Mayo held a protest in the town this afternoon demanding 100% redress for their homes.

However homeowners in Ballina, Co Mayo say while the scheme is supposed to see homeowners pay 10% of the cost of repairs, this is not the case, and that the cost to the homeowner can be more than 25%.

They say the cost to upgrade windows and doors is not included and that they have to cover the rental of property while works are being carried out on their homes.

Protesters in Ballina took to the five approach roads into the town today to highlight their calls for 100% percent redress ensuring that their homes are repaired adequately and are brought up-to-date with current building regulations.

The Department of Housing, which oversees the scheme, says it is aware of issues raised by groups in Mayo and Donegal but that it is too early to review the scheme at this stage.

Fianna Fáil TD Dara Calleary has said that he and other Oireachtas members for Mayo and representatives of homeowners in Mayo are due to meet with his party colleague, Minister for Housing Darragh O’Brien, on Thursday to discuss the scheme’s shortfalls in terms of funding.