A police watchdog has launched an investigation after the victim of a Troubles shooting was arrested at an anniversary event.

Mark Sykes was detained in the Ormeau Road area of Belfast after officers intervened at the memorial marking the 29th anniversary of a loyalist massacre at Sean Graham's bookmakers shop, his lawyer said.

He was arrested on suspicion of disorderly behaviour after officers moved to break up the event, the lawyer added.

The Police Ombudsman's Office said officers were involved in an "altercation" with a group of people who had gathered at an event to mark the anniversary and one person had been arrested.

A spokesman for the Police Ombudsman's Office said:  "We are aware of the incident and have received a complaint about what happened.

"Our investigation will focus on establishing all of the facts surrounding the incident and investigators will be examining all available evidence in order to consider the appropriateness of the actions taken by police, including the arrest."

Mr Byrne said: "I fully recognise the sensitivities of this incident and just how difficult a day this would have already been for the families who lost loved ones in the atrocity.

"That should not be forgotten.

"We are acutely aware that this is the latest incident to raise concerns about the enforcement of coronavirus regulations and illustrates there are no easy answers."

In a statement, he said: "Officers from the South Belfast local policing team came across a group of between 30 and 40 people gathered at a memorial event at the Sean Graham Bookmakers on the Ormeau Road at 2.30pm on Friday.

"As the event concluded, two officers approached a person to talk to him about a breach of the Health Protection Regulations.

"The situation quickly escalated and a man was arrested for disorderly behaviour and resisting arrest. He was taken to Musgrave police station and was released at 4.04pm.

"In the course of the incident a police officer sustained a minor injury to his face."

Mr Byrne said police were reviewing all footage of the incident including the officers' body-worn video, they had notified the Office of the Police Ombudsman and were conducting an "assessment of the conduct of the officers involved".

Five people, including a 15-year-old boy, were murdered and several others injured in February 1992 when Ulster Freedom Fighters (UFF) opened fire at the bookies. 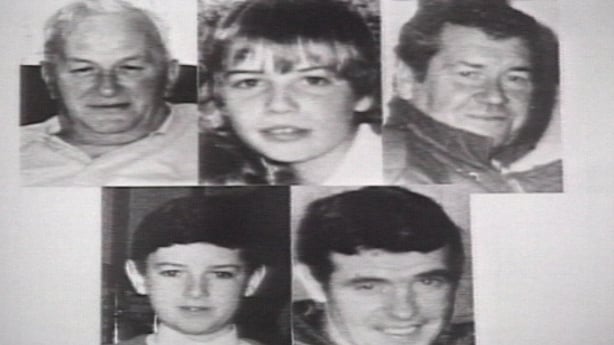 Footage of angry exchanges involving officers and those attending Friday's event have been posted online.

His lawyer Niall Murphy said: "Every year the victims and survivors gather in dignity to remember their loved ones and to say a short prayer.

"This year because of Covid restrictions it was restricted to the five families who maintained a dignified silence and left flowers down.

"The police attended, for what reason I will never know, approached victims and survivors of an atrocity and commenced to harass, push and assault man, woman and child."

Mr Murphy said his client was arrested on suspicion of disorderly behaviour.

"The only disorderly behaviour that happened on the Ormeau Road today was by the police who had no right to be there and who have wreaked havoc on community relations both in the Ormeau Road and in the wider community," he said.

"Unjustified heavy-handed tactics have been used towards relatives laying flowers including the arrest of one of the survivors.

After witnessing a shameful display of policing - at a dignified Family Commemoration into Sean Graham Bookmakers killings - I have written to the Police Ombudsman to request that she calls herself in and investigates the circumstances that led to an arrest. https://t.co/qKHBSbTbS4

Sinn Féin Policing Board member Gerry Kelly said he was "shocked and appalled" at the man's arrest. He accused police of "heavy-handed" tactics.

"The man and other relatives of the five victims of the massacre, which included a 15-year-old boy, were laying wreaths at the scene of the murders to mark the 29th anniversary of the slaying of their loved ones," he said.

Mr Kelly said family members had gathered to call for the publication of a delayed police ombudsman's report into the murders, amid allegations of state collusion.

"As the relatives were dispersing police moved in and arrested a victim of the bookies' massacre," he said.

Mr Kelly added: "This man should be released immediately and the police should apologise for adding insult to injury to the families of those who lost their lives in the massacre and who have waited almost 30 years for truth and justice."

PSNI Chief Constable Mr Byrne later tweeted to confirm he had spoken to Ms O'Neill about the incident.

"I have just spoken to deputy First Minister @moneillsf about the events on the Ormeau road this afternoon. We are currently working to establish all the facts."