Professor Paul Rouse of University College Dublin has been looking at the numbers and the trends in the Northern Ireland Assembly Election.

The big headline fact is that Sinn Féin gained the highest number of first preference votes in this election with 29%. In doing this, they increased their share of the vote from the 2017 Assembly election by 1.1%. It is more than enough to ensure that they will be the largest party in the Assembly.

Michelle O'Neill's claim that this is an "election of a generation" rests on the fact that she stands poised to serve as First Minister, providing a government can be formed.

In becoming the first nationalist leader of Northern Ireland, she would displace the representative of the Democratic Unionist Party (DUP) in the role.

Perhaps the most stark evidence of the gap which has emerged between the two parties is demonstrated by the fact that 250,388 first preference votes were cast for Sinn Féin candidates, compared with 184,002 for the DUP. A symbolic result in this respect saw Sinn Féin overtake the DUP in the Upper Bann constituency. 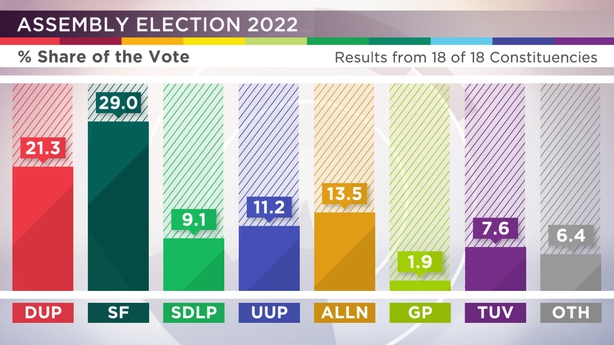 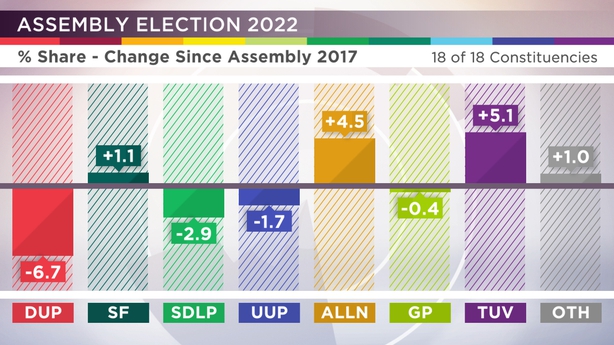 Many of the DUP's votes were lost to Jim Allister's Traditional Unionist Voice (TUV). This hard-line unionist party increased their share of the vote by 5.1% to reach a total of 7.6%. The TUV may also have taken votes from the Ulster Unionist Party (UUP) whose share of the vote fell to 11.2%, a decline of 1.7% from 2017.

If the UUP had a disappointing election, so too did the Social Democratic and Labour Party (SDLP). Indeed, as well as losing seats, the reality for the SDLP is that this election saw it secure the lowest share of the vote in its history, at 9.1%.

While these results would suggest a hardening of the divides between nationalists and unionists, there is another story in the election that is worth considering. 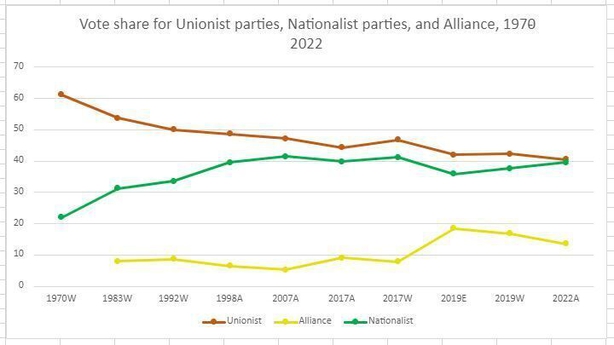 Support for unionist parties (DUP, UUP, TUV, Con), on the one hand, and for nationalist parties (SF, SDLP, Aontú) on the other, has actually fallen.

Central to this decline in share for unionists and nationalists is the rise of the Alliance Party. They are now the largest party in Belfast East, Belfast South and North Down. Their share of the vote now stands at 13.5%, an increase of 4.5% on 2017.

By contrast, across Britain the Green Party enjoyed great successes. In England, they added some 60 seats, in Scotland they took an additional 35 seats and in Wales an extra eight.

There is one final point of note. Some 862,700 people voted in the 2022 Assembly Elections. This was considerably higher than the 803,315 who voted in the 2017 Elections. Indeed, it stands as the highest number ever to vote in local elections in Northern Ireland.