Approximately one-in-four crèches across the country have been classified as 'high risk' by the Child and Family Agency Tusla, RTÉ Investigates can reveal.

Data from Tusla’s own internal risk rating register, which has been seen by RTÉ, shows over half of the ‘high risk’ services are located in the wider Dublin area.

The Risk Rating Register is compiled from data from a number of sources, including inspections reports carried out on childcare providers across the country.

Of the eight Tusla inspectorate areas, the Dublin regions account for over a third of the ‘high risks’ identified by inspectors on visits to childcare facilities nationwide.

They include Dublin North where there are 212 full day care services.

Tusla’s internal risk rating register shows only 3% or seven of those services were classified as fully compliant on inspection. Namely, there were no issues of concern identified by the inspectors. 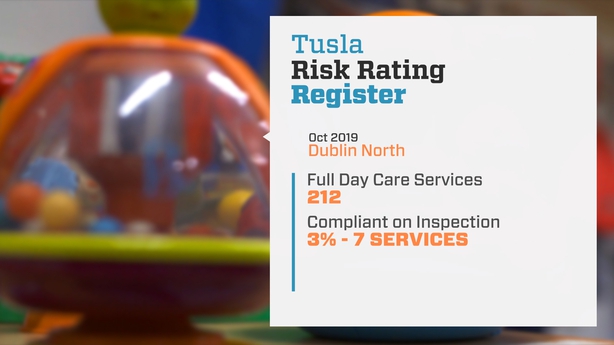 Delving further into the figures for Dublin North, it is found that 39% of those services, i.e. 83 crèches, were classified as 'high risk'. 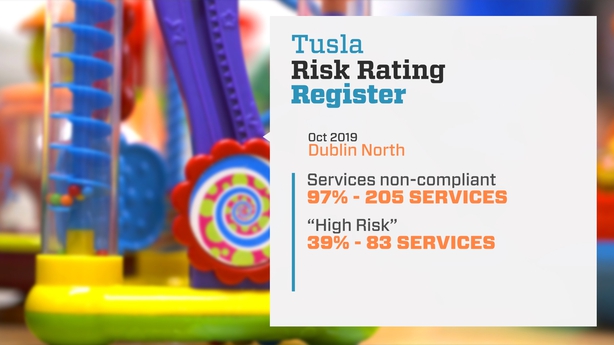 Tusla has three main categories of risk: high, medium and low. According to Tusla’s own Service Risk Ratings document from January 2019, a number of cases of ‘high risk’ rating arises because the child care services have not been inspected since 2016.

In other words, it has been three years since Tusla inspectors actually inspected those services.

The other classifications of ‘high risk’ primarily arise because services have repeatedly breached important childcare regulations.

These include not having appropriate garda vetting in place for carers working with children, inadequate staff numbers and a failure to maintain required adult to child ratios.

They also relate to issues regarding the safeguarding of children, the appropriateness of the building in which they are being cared for and not having enough space for the number of children in the facility. 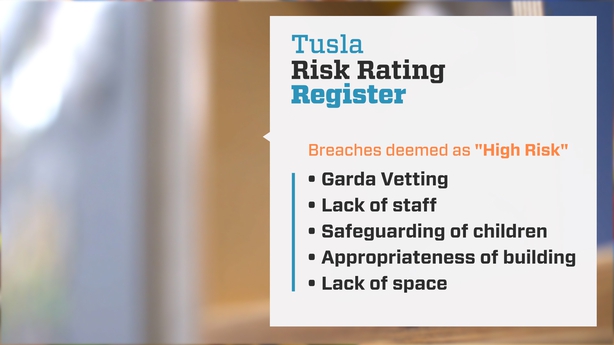 In the second inspectorate area of Dublin and North East, the Tusla data shows there are 230 full day care services.

Overall 95% of those services failed to meet regulation standards on inspection and of those, 91 services or 39%, were classified as ‘high risk’. 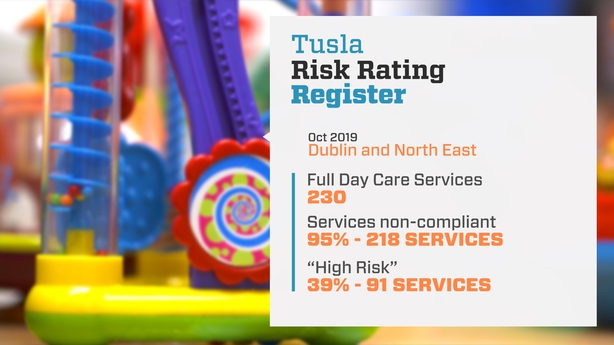 While in the third inspectorate area of Dublin South, there are 209 full day care services and inspectors found only 6% were fully compliant. Delving further into those particular crèches it is revealed 32% or 68 services were classified by Tusla as ‘high risk’. 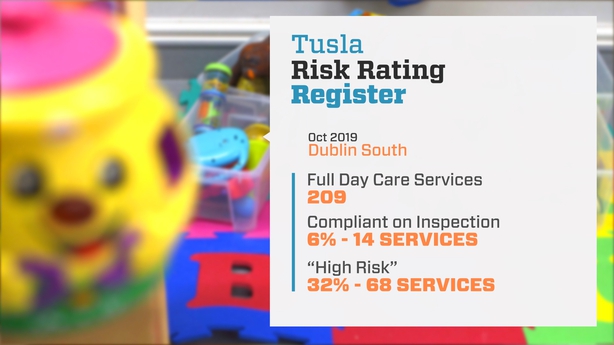 In all, out of a total of just over 650 services in the wider Dublin region, Tusla’s own internal Risk Register reveals only 14% are fully compliant with childcare regulations.

Furthermore, 37% of crèches in the wider Dublin area are classified as ‘high risk’, which is more than one-in-every-three services.

The level of high risk classifications identified outside Dublin appears to be lower, with one notable exception –the North West.

In this inspectorate area, there are 156 full day care services but only 8% of those passed the inspection process with 68 services - 43% - classified by Tusla as being ‘high risk’. 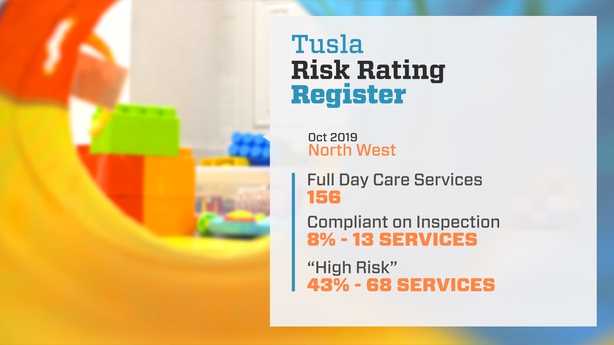 This means around the country there are currently just over 430 crèches which are classified by Tusla in their own Risk Register as operating with some level of ‘high risk’.

In a statement, Tusla said RTÉ was misinterpreting the documents, stating the agency can definitively say the documents RTÉ has seen are not indicators of compliance in the sector and they are only used for scheduling inspections.

However, some sources in Tusla who spoke to RTÉ dispute that definition of the Risk Rating Register, saying the data is compiled from inspection reports after regulation breaches have been identified by inspectors.

Separately, RTÉ Investigates has also learned that a number of early years services have been caring for children without appropriate registration with Tusla. 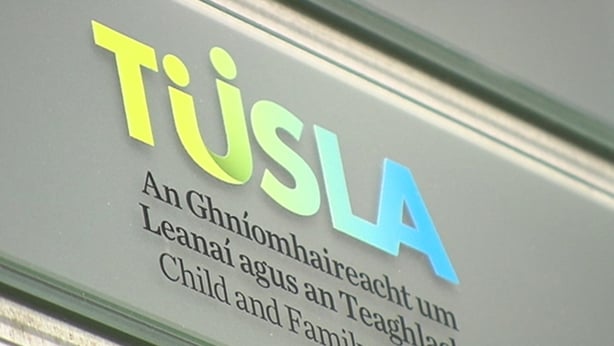 Last month senior Tusla officials were before a sitting of the Oireachtas Committee on Children and Youth Affairs. The meeting was arranged to provide an update following the broadcast of an RTÉ Investigates programme last July on standards of care at a Dublin crèche chain.

The officials were questioned on a number of topics including the issue of unregistered crèches with senior management confirming no crèches were operating without registration.

Following the committee hearing, RTÉ Investigates decided to look at the matter of unregistered crèches and discovered a number of early years services operating that were not registered to do so.

An RTÉ researcher called to a number of these services looking for a place for her child. For legal reasons we cannot name the crèches.

The fact that there are services providing that scheme who are unregistered is quite a shock.

Childcare legislation states that service providers must apply for registration at least three months before setting up. However, on each occasion we found the services to be open for business with the majority still openly trading without registration in place.

"Registration is putting it out there that what you are providing is meeting standards, it’s telling parents that you are aware of what’s expected and that you are endeavouring to meet all those requirements. It also offers funds – unregistered services should not be in receipt of public funding," said early childhood expert Nóirín Hayes.

However, despite rules governing payments under the free preschool year scheme or ECCE as it is also known, RTÉ Investigates discovered some of the services our researcher visited were actually in receipt of this public funding while operating without registration.

"That’s a surprise to me," Ms Hayes added. "The fact that there are services providing that scheme who are unregistered is quite a shock. It’s a reflection of the need to actually rethink much more closely how we integrate what’s happening in the early childhood education space.

The agency told RTÉ Investigates one of the services was refused registration in September and on the basis of information provided by RTÉ it will now be re-monitored.

In a statement to RTÉ, the Department of Children and Youth Affairs said it does "... not fund any newly established services which are not Tusla registered" but it "... accepts that some pre-existing montessori pre-school services may have been inadvertently funded without Tusla registration, but this applies to a small number of Montessori schools who were members of the Irish Montessori Education Board".

RTÉ asked Tusla how it was that each of the services our researcher visited were allowed to care for children without registration.

In a statement the agency told RTÉ Investigates one of the services was refused registration in September and on the basis of information provided by RTÉ it will now be re-monitored.

Another service closed in recent days and has now applied to Tusla for registration for a full-time service.

We found a second service open and operating. This service was recently acquitted in court when Tusla failed to provide definitive evidence it was acting as an early years service. It is also to be monitored again as a result of information provided by RTÉ.

A third service which was unregistered for a long period was inspected last Wednesday and was registered last Thursday, while another service closed in recent days and has now applied to Tusla for registration for a full-time service.

RTÉ Investigates understands some of these actions were put in place subsequent to our contact with the service providers and Tusla.

In its statement Tusla added that the information provided by it to the Oireachtas Committee "…was accurate on the day" and "…nothing has emerged since that contradicts that position". 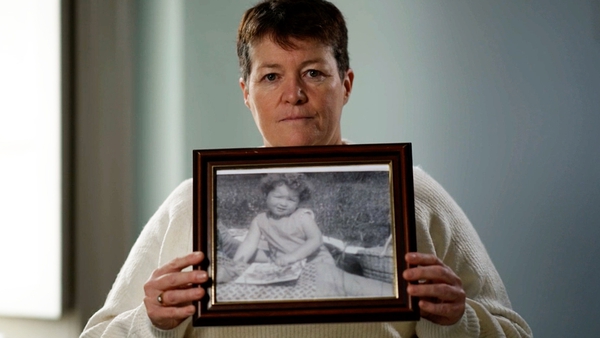 'To have that identity ripped away was gut-wrenching' 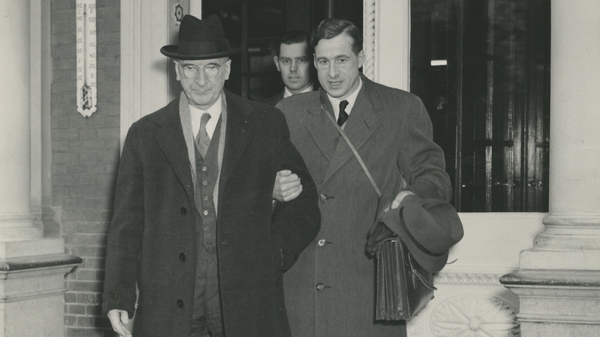