The roaring 20s may not have materialised in some parts of the economy but when it comes to the property market in Ireland, the early years of the decade have been pretty shouty.

An expected pandemic driven collapse in property prices failed to come to pass in 2020 giving way instead to a market that showed signs of considerable frothiness extending into the years that followed.

However, as 2022 came to a close the property market was showing signs of - for some - a welcome slowdown, but can it be sustained?

As with the years that preceded it, movements in the property market in 2022 were dictated by a lack of supply and pent-up demand for housing.

That saw prices continuing to rack up substantial increases for most of the year.

As we entered the final quarter, though, there were signs that the brakes were being applied with rising borrowing costs and a substantial hike in the cost of living hitting wallets.

While those factors may precipitate a demand lag, there were signs as the year drew to a close that the supply of new housing could be slowing significantly as housing starts, or commencements, were curtailed by ongoing supply chain issues and rising construction costs.

That's a development that may have implications down the tracks as the supply of housing potentially fails to meet targets.

A year of two halves

The property market kicked off 2022 with percentage price rises in double digits, where they had been since August of the previous year.

In the early months of this year, the rate of price increase settled at around 15% before falling back in the months that followed.

By October, inflation had slowed to 9.8% with property prices rising in the month by just 0.4%, according to official figures produced by the Central Statistics Office.

"It was the smallest month-on-month price gain since April and the first time the annual inflation rate has been in single-digit-territory since mid-2021," Conall MacCoille, Chief Economist at Davy noted.

He produces the analysis of the property price figures for the website myhome.ie. Like its counterpart, daft.ie, the reports are based on asking prices for properties which can often act as a leading indicator for the official figures.

The latest report from myhome.ie captured the rate of asking price increase settling back into single digits by the end of September. At 7.8%, it was down from close to 11% at the end of June.

That had led Davy to forecast property price inflation slowing to 6% by the end of the year, but Mr MacCoille said that may have been a little too pessimistic in light of the most recent official statistics.

"The index in October has proven to be a little more resilient than we expected, frustrating anecdotal evidence that a marked slowdown is now underway," he concluded. 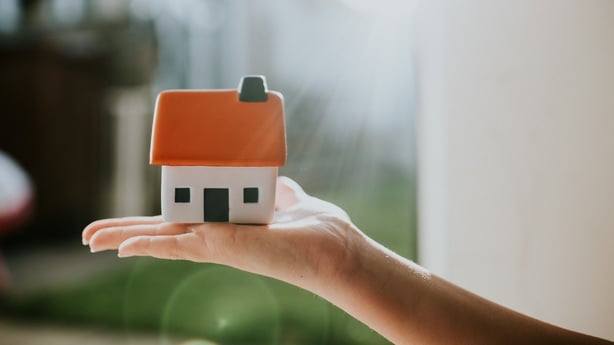 One development that may frustrate price moderation further down the tracks is a recent apparent stalling in housing commencements.

Following on from a pandemic induced slowdown in 2020 and the following year, when building sites were closed for long periods, the construction sector hit the ground running when restrictions were fully lifted.

Although just over 20,000 units were completed in each of those years - quite a decent outcome in light of the pandemic shutdowns - there was a fair degree of momentum behind 'housing starts' which bore fruit this year with the industry on course to surpass government targets.

"It looks likely we'll build at least 28,000 dwelling units this year. The government targets for this year are 24,600, so we'll easily surpass those," John McCartney, Head of Research with BNP Paribas Real Estate Ireland said.

He noted that the industry was on course for strong delivery in 2023, but that 2024 was less certain because of a slowdown in builders breaking ground on new sites.

"Housing commencements are back 14% year on year," he pointed out.

"We have this paradoxical situation where delivery of completed product remains strong and will do so for the next 18 months, but we're seeing a slowdown in early-stage activity."

The Government's Housing for All plan targets the construction of 33,000 housing units annually up to 2030, but that looks challenging now with a slowdown in sight for both apartment developments and houses.

"Viability may also be an issue in terms of housing construction, but other factors, such as land availability, are also playing a role," he added.

As well as the supply of new builds, a properly functioning property market depends on a steady flow of older stock.

But that side of the equation has been under pressure for the past few years too.

However, according to Ronan Lyons, Associate Professor of Economics at Trinity College and author of the reports from daft.ie, supply has improved marginally in parts of the country since Covid-19 completely disrupted the market.

The supply of homes in Dublin had fallen to 2,700 in the early part of the year, he noted, but gradually improved to exceed 4,000 between June and September, leading to stability in prices in the capital.

In the rest of the country supply remains under pressure with stock at low levels compared to the average over the past 15 years.

And that's reflected in the price movements. According to the CSO figures for October, price inflation outside of Dublin registered at 11% while it was a less frothy 8.3% in the capital.

With a strong pipeline of new builds coming to market in the months ahead, a continued moderation in prices could be on the cards for next year.

"The open question for the coming months is, with interest rates rising and significant inflation in non-housing costs, for effectively the first time in 15 years, whether falling demand will play its role too," Ronan Lyons said.

In the early summer of this year, anyone in the market for a mortgage was operating from a position of European Central Bank base interest rates languishing at rock bottom.

Since July, the ECB has hiked rates on four occasions bringing the main borrowing rate in the eurozone to 2.5%.

Some mortgage providers - those that borrow on the money markets - responded immediately with successive rate hikes on their products.

However, the main banks, which are crammed with customer deposits right now, have introduced fairly modest increases in their fixed rate offerings. (Tracker customers have automatically been hit by the rate increases, but tracker products have not been available to new customers for many years).

As lenders across the eurozone moved swiftly in raising pricing, average rates here have fallen from among the most expensive in Europe to closer to the euro zone average.

But rates are rising and it's unlikely they will reverse course any time soon. And that's being reflected in changes in the market with lenders starting to pull back on the duration of fixed rate products that they had been offering.

Avant Money is now the only lender offering a fixed rate for longer than 10 years.

"Conditions attached to lending, such as stress tests, are also tightening which is impacting aspiring mortgage applicants," Rachel McGovern, Director of Financial Services at Brokers Ireland pointed out.

That looks like it's starting to be reflected in the mortgage market with annual approvals hitting the lowest level in 17 months in October, according to data from the Banking and Payments Federation of Ireland.

Adding to the stress on household finances is the cost of living with inflation running at an annual rate of around 9% here.

A report from the Central Bank and the recruitment website Indeed published in the last few weeks found that the rate of growth in wages had slowed from a peak of 5.2% in July and August to 4.6% in November.

Recent retrenchment in the tech sector and an expected sharp slowdown in economic growth could add to the factors convincing people to sit out the uncertainty, potentially taking further pressure off the property market next year.

However, any slowdown next year is likely to be offset by a number of developments.

An extension of the Government's Help to Buy scheme until the end of 2024 and the new first home shared-equity scheme will likely keep first time buyers active in the market.

And the Central Bank's macroprudential lending rules are to be relaxed from January, increasing the loan-to-income limits for first-time buyers from three and a half to four times income.

The loan-to-value limits for second and subsequent buyers are also to be extended to 90% from 80%.

The Banking and Payments Federation believes a combination of those factors and others will support the market into next year.

"While in the short-term mortgage demand may be impacted by the cost-of-living crisis and general economic uncertainty, this may well be offset by factors such as pent-up demand and high rental costs which will sustain home buying demand into the future resulting in price pressures, albeit at a lower level, unless supply increases substantially," Brian Hayes, Chief Executive of the BPFI said in the group's recently published Housing Market Monitor.

How low that 'lower' level of price inflation will be depends on the alignment of the many moving parts outlined.

Accounting for all the possible variables, the market looks to be on course for slower growth in 2023.

Beyond that, whether it's a welcome breather or a return to the roaring 20s for property is anyone's guess.